cathy petocz debuts new play ‘where i end and you begin’ 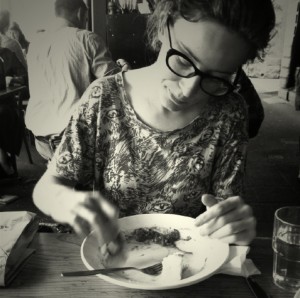 Writer, actor, musician and general creative extraordinaire, Cathy Petocz, is set to wow Canberra audiences from tomorrow until October 26 with the world first debut of her new play, Where I End and You Begin, showing at The Street Theatre.

Directed by Caroline Stacey, the production follows two private detectives in very different universes: Polly is in a cafe interviewing a client who suffers mysterious blackouts after meeting the girl of his dreams, whilst Whatsisname is in outer space tracking down a missing person. As the adventures play out, the two worlds merge, sucking in innocent bystanders and becoming one, destructive ‘unreality’.  Petocz tells Lip:

“The plot is very ambiguous, very fluid…it’s crazy! All you can do is let it go. The confusion is important because it reflects the nature of relationships, but there’s also a great sense of wonder in the work which is equally important”.

The story takes inspiration from French performance artist Sophie Calle, who is fascinated with the intersect between our public lives and private selves. Calle’s essay, The Detective (1980) describes how the artist hired a private investigator to follow her around for a specific day and explores ideas of the inner and outer self, watching and being watched and the reciprocated influence individuals have over the behaviour of others- Calle was particularly interested in how that both her and the private investigator simultaneously influenced each other’s day.

“Calle is a performance artist who creates things just by making things happen…with this play I thought of the audience the whole way through and how they would react to things.Writing this play has felt very much like planning a party – setting up the conditions for potential wildness. As a host you can’t force the party to come to life, you must invite the right people, have the best treats on hand, and trust it will all happen. I hope the audience have that feeling too – going to a party.”

A work in progress for four years, the manuscript is actually structured into two separate plays, written on either side of the page. Whilst separate, both plays relate to and complement each other.

“The writing process for Where I End & You Begin was like scoring music as the two plays’ dialogue run down the page in two columns.  The text reads within its own play, or column, but also bears a relationship to the text in the other play.  This connection has a musicality, and also meaning – sometimes jokes, sometimes clues, sometimes something really heartfelt.”

Petocz is quick to acknowledge director Caroline Stacey, whose creative input and direction has been invaluable. It was Stacey who made the decision to stage the play in traverse, with the audience on either side facing each other, reinforcing Petocz’s interest in seeing and being seen:

“It has been wonderful to work with Caroline Stacey on this project. She usually directs complicated works like operas and so she has an exceptional sensitivity to the excessive nature of Where I End & You Begin. From the very beginning she saw things in the work that no one else saw. After the showing in First Seen in 2012, when most audience members were reeling from the doubled dialogue of the two plays, she quietly told me how interesting the spaces and the silences were in the work. I was very excited when she was interested in directing the work.”

Described by Petocz as “excessive”, Where I End and You Begin is the writer’s first full length play and promises to be an impressive offering by one of Australia’s most promising and diverse emerging writers. Tickets are $30 and can be purchased online.