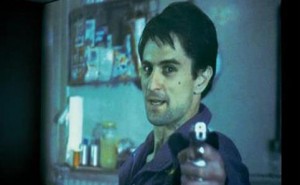 Douglas Gordon’s first retrospective in Australia, showing at the Australian Centre for Contemporary Art in Melbourne, amplifies over twenty years of his work both physically and metaphorically. Most concretely, a collection of videos in Pretty much every film and video work from about 1992 until now are shown on 101 televisions occupying ACCA’s main room, spectacularly surveying the artists’ output and major concerns. This duality in gesture and meaning is pivotal to the Turner Prize winner’s work and is made especially clear in this exhibition, curated by Juliana Engberg specifically for ACCA’s spaces.

The labyrinthine nature of the gallery is particularly suited to the journey Gordon takes us on with The Only Way Out Is The Only Way In. This circular thinking comes across as intentionally confusing at first, but when you start taking apart the titles of Gordon’s artworks you gain a better understanding of the work and your own preconceptions. This is his life’s work: revealing the inner contradictions and splintering of self that individuals often aren’t aware of. For me, the moment of realisation was sudden and jarring.

Walking out of the darkened cavity containing video projection Between Darkness and Light (After William Blake), I was confronted by my self, reflected in two large mirrors hung one above the other on the wall opposite. Immediately, I turned away from my reflection and walked into an even larger room of mirrors. These were interspersed with an equal number of photographs, all in varying sizes and arrangements. Everywhere you turned, you glimpsed a small part of yourself: your feet (do I really stand like that when I’m thinking?), your gaze at eye level (a quick dart of the eyes to see if anyone else is looking at you), your jeans (stains you hadn’t noticed). Meanwhile, there are 180 photographs to be considered. We are endlessly distracted by ourselves. This is the idea behind Everything is nothing without its reflection: a photographic pantomime, which considers our ability to know and to discover simply by looking. When it comes to ourselves, looking is something we can’t do alone; we need the aid of a ‘looking glass’. This is part of why it’s shocking to see one’s reflection – one’s whole self – for the first time as a small child.

The photos displayed in Everything is nothing… have some pretty clear themes that are also replicated in the survey of Gordon’s video work. A snake charmer is captured gazing at the cobra he has managed to bring upright and swaying, while in the video in the next room we see him struggling with some more temperamental snakes. Back in the room of photos, close-ups of flies are interspersed with depictions of flesh, both animal and human. A particularly grotesque and intriguing image turns out to be so pedestrian – a roast leg of lamb – that this in itself unsettles the viewer, perhaps even more so than the toads, crows, snakes and scorpions Gordon displays. While there is an obvious fixation on the sinister and darker elements of life, Gordon recognises that you can’t have darkness without light. Happy snaps, fields of flowers, the clean and pure flesh of babies are all shown alongside the unsavoury. Everything can be split, mirrored and bisected in Douglas Gordon’s world.

By the time you reach the final artwork, 30 seconds text, you are very much alone, in a dark room, with just some words on a page (which are projected on to the wall). The words are supposed to take 30 seconds to read and they recount the experience of an executioner in France who spent 30 seconds experimenting with the life that he believed was left in one of his victims of the guillotine. He called out the man’s name twice; both times the eyes of the disembodied head opened and showed recognition.

This gruesome story, recounting the final moments of a dead man’s life, coupled with the allocated time you have to read the tale, forces you to think carefully about your own finite time before the light cuts out on you (as it does after 30 seconds). Even when Gordon intends you to be alone with yourself and your thoughts, the duality of meaning is inescapable. This is what he means by the maxim ‘The only way out is the only way in’. We have to confront our selves, both the bad and the good, to truly know who we are. Then, in turn, we can begin to know our world.

Douglas Gordon – The Only Way Out Is The Only Way In is showing at the Australian Centre for Contemporary Art in Melbourne until 3 August, 2014. Admission is free.