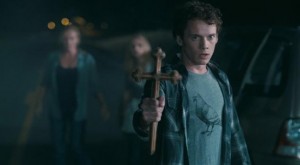 Fright Night, directed by Craig Gillespie, is horror comedy about a boy named Charley Brewster (Anton Yelchin) who believes his new neighbour Jerry (Colin Farrell) is a vampire. To begin with, the movie starts off with nail biting tension, getting straight into the action. In many parts there’s a lot of anxiousness, resulting in quite a bit of flinching and jumping. Fright Night has embraced and makes fun of itself and the ridiculousness of the whole vampire myth and the facade of the vampire slayer.

The movie is even more enjoyable with well-known and loved actors David Tennant (Doctor Who, Harry Potter) and Toni Collette (Little Miss Sunshine, In Her Shoes) staring as well. David Tennant’s character Peter Vincent is not your typical old-school vampire slayer. Usually strong, loyal and brave, Vincent is the complete opposite – he turns out to be a vulnerable man who often turns to alcohol. However these characteristics are also what makes him something common in modern films and stories, as this is increasingly what we imagine ‘hero’s’ are like. Flawed, vulnerable and relatable.

In many ways, Fright Night encompasses the old techniques in horror films that aren’t as common today as they were in the past. A simple plot which is clear, concise and enjoyable adds to the amusement. There is a fair bit of blood in this film, and it’s a fresh change from many others out at the moment. Although, the humour that is woven throughout, manages to counteract the gore.

The storyline is enjoyable and easy to follow, but the lack of complexity does not detract from the film. The actions of the villain leaves one wondering what will happen next and who will die next. The constant tension keeps the viewer on the edge of their seat and waiting to see what happens. The movie is quite crude which may tarnish its appeal to other audiences, but younger generations will find it very enjoyable.

Fright Night pays homage to all good vampire movies, using old techniques to embrace the dogma of older horror and cult films that we know and love. But it also adds a modern twist on the 1980’s version written by Tom Holland, which makes it more enjoyable.