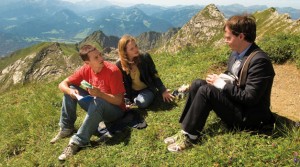 Vincent Wants To Sea tells the story of a 27-year old Tourette’s sufferer (Florian David Fitz, Men In The City who also doubles as the film’s screenwriter). At the insistence of his busy and uncaring, politician father (Heino Ferch) and following his mother’s passing, Vincent is institutionalised and is forced to share a room with the obsessive-compulsive Alexander (Johannes Allmayer). He also meets anorexia patient, Marie (Karoline Herfurth) and the unlikely trio embark on a road trip after stealing the beat-up Saab belonging to their therapist, Dr. Rose (Katharina Müller-Elmau).

Vincent’s mission is a simple one. Armed with a rare photograph of his late mother looking happy by the seaside, he decides to fulfill her dying wish and scatter her ashes in the Italian sea. The epic journey begins in Germany and along the way the trio learn more about each other and eventually bond over their foibles. They also come to appreciate their newfound escape, albeit as fugitives of sorts. What started off as a straightforward plan, becomes complicated by their having to steal transport and supplies, not to mention personal issues like annoying each other with their individual problems. Vincent in particular, gets the trio into a number of strange and sticky situations because his tics and easily dropped profanities are as uncontrollable as a sneeze.

The film ultimately tackles dark themes with gentle doses of humour. The result is an emotional drama that is hardly groundbreaking, but is certainly an endearing little tale that will leave you rooting for these determined underdogs. It will also leave you hoping that what this little group can achieve is as boundless as the mountains (the Alps) that serve as the movie’s backdrop. The scenery is gorgeous and the cinematography is perfect, with panoramic mountains and idyllic coastlines worth the admission price alone.

For all the tragic circumstances and the messiness in their lives, Vincent Wants To Sea does not wallow in melancholy. Instead it triumphs above the darkness with the audience treated to a light romp through the European continent. In short, it provides one altogether entertaining ride that is as touching and good for you as some chicken soup for the soul.