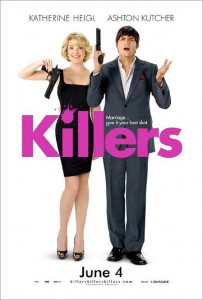 Killers left this reviewer thinking on more than one occasion, “Just kill me now.  Put an end to my misery.  Sweet, sweet death will be my only release.”  Maybe I should’ve consoled myself with the fact that this film had a mere hour-and-a-half run time, but you weren’t there.  You don’t understand.  Those 93 minutes seemed to stretch on endlessly.

Killers, directed by Robert Luketic (and when you learn that his most recent fare previously was The Ugly Truth, suddenly how abysmal this film is makes a lot more sense), introduces us to stereotypically neurotic and otherwise-uninteresting Jen (Katherine Heigl, Knocked Up) who on a family holiday finally meets and marries the man of her dreams, Spencer (Ashton Kutcher, Valentine’s Day).  The twist, if one could call it that: Spencer is secretly a CIA agent.  Three years later, when the happy couple is settled in suburbia, half of their friendly neighbourhood suddenly starts trying to kill them.  In a perfect world, this is where the fast-paced plot, quick-tongued banter and kick-ass action sequences would start.  Alas.

The film – lacking in the requisite romance, comedy and action typically expected of an ‘action romantic-comedy’ – meanders aimlessly towards a nonsensical and emotionally-unsatisfying conclusion

Kutcher is tolerable enough, in the way that one might tolerate an annoying work colleague who likes to talk to you about their stamp collection.  Nice enough, a little bland – but he is horribly miscast as a steely-eyed CIA agent.  Why other characters in the film repeatedly reference Kutcher’s attractiveness (and why in one asinine and uncomfortable scene he gets to kiss Heigl’s breasts) makes little sense.  Until the credits role, that is, and Kutcher’s position as a co-producer is revealed.

Jen’s character is annoying, but not even annoying enough to inspire some sort emotional involvement from the audience.  Even hatred at this point would have been a welcome emotion, rather than the gradual sapping of will to live.  Heigl is completely uncharismatic; the lack of chemistry between these two leads is somewhat alarming.  He’s a man, she’s a woman, and surely they can do a little better than act like they’re talking to ironing boards whenever they converse?

Beneath the layers of blandness and mediocrity that have created this formulaic farce, one can see potential.  It could’ve been a satire on suburban values.  It could have upped the ante and become a genuinely entertaining b-grade blood and guts flick.  Heck, it could’ve done with a re-write or two and escaped with the respectable title ‘worst romantic-comedy of the year,’ rather than the ‘worst film of the year’ label it’s gunning for at the moment.