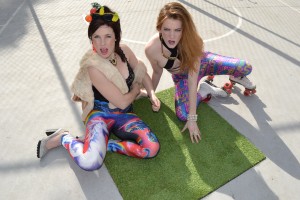 From the first moment I entered the building, I knew that I was in for a memorable night.

The entire venue—including the foyer—was luridly and gloriously adorned. Amongst the decor were several blow-up flamingos, lots of plastic cupcakes and miscellaneous neon-coloured props scattered everywhere. In the middle of the performance space sat a small tub filled with mysterious pink liquid, and to one side, a mannequin with a detachable head. Both of these items would soon reveal their worth.

Hersteria, written and performed by duo Simone French and Cait Spiker, comprises a imaginative, witty—and at times unexpectedly sobering—commentary on what makes an ‘ideal woman’. Or rather, what it means to be an ‘ideal woman’ in the current context, by today’s stringent standards and warped perceptions.

The performance opened with the two debating the literal construction of an ‘ideal woman’, selecting typically desired features from random celebrities in an ‘exquisite-corpse style mash-up of feminine perfection.

With sharp dialogue and charismatic stage presence, the two continued to take the audience through a series of scenarios. From training relentlessly at gym working to achieve the perfect figure, to facing pressures of marriage and motherhood, to arguments centring around sexual politics and the stigmatised ageing female body, the duo covered basically every dilemma that the typical Western woman finds herself grappling with at one point or another.

Even such detailed descriptions of these scenes hardly do the performance justice. Within such tight spatial confines, these acts were not only confronting and unexpected, but incredibly engaging. The actresses’ ability to remain completely straight-faced during the entire process was also something I found a point very worthy of note.

The issues addressed were so dramatically and comically portrayed that it seemed at times a complete mockery, but despite the humour, there remained grounded throughout an astute feminist message. Most of the ideals that contemporary girls and women strive to achieve are riddled with contradiction and fantasy, and this was highlighted in the show.

Another key point of commentary (both subtly and very, very overtly demonstrated) was that of woman-on-woman hate; the sense of competition, jealousy, resentment and oneupmanship that nowadays is all too prevalent. ‘Horizontal hostility’—a phrase used most prolifically circa the 1970s, and used most notably in respect to racial and feminist politics—pretty aptly sums up this animosity. Though the sentiment was conveyed in a largely comedic manner, it highlighted effectively a very real negativity amongst women, fuelled by patriarchal ideology and unrealistic expectations of womanhood.

Therefore, the performance wasn’t just hilarious but it was poignant too, and left me with a lot to contemplate. Hersteria, as part of the Melbourne Fringe Festival, runs until the 2nd of October at SOKOL Melbourne.