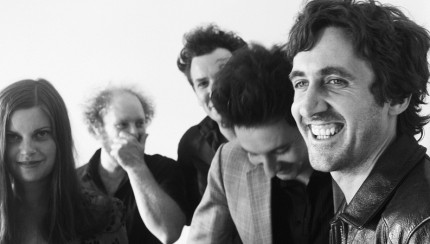 ‘Dreams are like stars. They’re there during the day, but you just can’t see them’.

That’s the Carl Sagan quote that Gareth Liddiard of The Drones paraphrases to explain the music on the band’s sixth studio album, I Sea Seaweed. If I’d been hoping to get a solid answer about the album’s concept,  I would have been disappointed. ‘There’s not really a story’, Gareth tells me. ‘It’s more in the approach to the writing – more of a figurative dreamscape, waking dream type thing, that’s less specific and more universal’. He continues, clearly trying to establish some kind of shared understanding. ‘You know how dreams are kind of irrational and don’t make much sense, but can still be moving? It’s kind of like that’.

What you have in Gareth Liddiard is a man who clearly understands just how powerful music is, and how responsible a musician is for creating meaning.

Well regarded as one of the most powerful and emotive songwriters in the country, it’s clear that what drives Gareth and in turn the rest of the band, is the desire to establish a connection with their audience – a connection that goes beyond enjoying a song for four minutes. He explains why he writes songs with such powerful stories behind them by despairing of others who don’t. ‘When lyrics are not that important, I think that’s weird. If you’re going to sing, you should sing something worthwhile and you should connect. I’m not one of those people who do it for myself – I need to connect’. He likes that kind of music himself, the kind in which the lyrics create such a story that you almost feel you’re living in the song. He cites Leonard Cohen as one of the people who’ve influenced him to write this way, although in the beginning it was just ‘a reaction to people not writing like that’. What may have started out as a reaction has become the backbone of the band, with The Drones known for songs that invoke much more than a feeling, instead telling stories of loss, struggle and endurance, all set against a vivid Australian backdrop.

I was wrong, though, in believing that the distinctively Australian aesthetic has always been a purposeful move. Gareth gives the impression that he is not at all a planner, and he uses this to answer my question about the direction of the band, and a stint in the UK trying to make their very Australian music work. ‘It’s never been a conscious thing [the Australian songwriting]. I’ve never imposed ideas on what I do. I’m kind of lazy so things just tend to happen by themselves organically. It’s like riding a wave. You don’t make the wave, you just get on it’.

Imagined or not, this laziness certainly hasn’t hampered the band. The new album has been met with the kind of critical acclaim that can just as easily evade a band coming off a break. When he speaks on the album’s reception, Gareth is as humble as you’d expect. ‘I’m always surprised and we’re always surprised. You make an album and you don’t know what you’ve got until you’ve finished. You reach a level that’s not shit and then you go and put it out and you can’t expect everyone to like it every time’.

Although the album is enjoying similar success to their earlier works, there’s a definite change to how The Drones are making music. Lyrics and melody dance around each other in a new way and there seems to be a shift towards comfortable silences. It’s not as noisy. Gareth confirms that this was a conscious move, and talks briefly about the music the band used to make. ‘Early on it was crazy, out of control and totally off the rails. It had a lot of energy because we were younger – it had moments that were totally psychotic and were driven by emotion. As you get older you tend to those emotions and you become more of a cerebral animal’.

Clearly, The Drones care deeply about making music that avoids that self-indulgence that often befalls rock bands. ‘You need to understand that someone’s listening and that you can’t have this hostile mess the whole time, it’s too self indulgent. It’s kind of got to be fucked up and weird but at the same time you’ve got to want to listen to it’.

This kind of respect for fans extends to how Gareth believes a live show should be played. He speaks about the Washington, D.C. band, Fugazi, praising their live presence. ‘We’d go and see them and their live gigs were amazing because they didn’t just go out and launch into a song. They’d walk out and scratch their arses and adjust their mic stands and get to know you. They’d talk to the crowd for 10 minutes and make everyone feel like they’re in the room together. When that happens there’s no separation, it’s a party and everyone’s involved’. This audience connection is obviously what drives Gareth to do what he does, and he touches on it once more before the end of our chat. ‘It’s a special feeling, that connection’, he says. ‘And that’s what music was 100 000 years ago. That’s what it would have been’.

The Drones kick off their I Sea Seaweed national tour on the 11th of April in Queensland, before heading to Perth, Adelaide, Melbourne and Sydney.