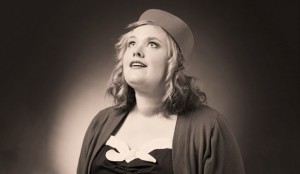 If you’re looking for something to do in Melbourne, The Butterfly Club is a great place to go if you’re after hilarious night out with talented and devoted performances. This week from the 24th – 28th you can catch an exciting show that’s all about transporting the audience to those glamorous Hollywood years of old time America. You’ll laugh, you’ll cry, and you’ll certainly feel elegant.

I had a chat with Anna Rezenbrink, the creator of Understudied, about her career so far and about her hopes and dreams for the future.

Could you tell us about why you decided to become a part of the theatre world? What do you love most about it?

I’ve always been a performer! As a child I was a total show boat and loved the feeling of having everyone’s attention while I rattled off some story. About 15 years ago I started improvisation classes with a company called Impro Melbourne. From the very first class I felt I had found my people – positive, witty, supportive and a little bit eccentric. I kept training and performing with IM and truly became addicted to that feeling of being with an audience for those few moments – the joy that comes from knowing you’ve entertained, surprised and hopefully moved an audience. It’s a treat!

It’s been a slow and steady progression! Ten years of regular workshops and shows in Melbourne, and then in the last five years I’ve pushed forward to get overseas and interstate to perform and teach and generally expand my horizons. The improv theatre scene in Australia is really thriving.

I have always worked full time while supporting my creative habit! I work for an insurance company, in a compliance role- which seems like the direct opposite of acting/theatre making & comedy!

I firmly believe that the skills I have learnt in improv have made me a better corporate worker – I’m the lateral thinker in the team – and conversely I have a whole set of coaching & influencing skills which help me when dealing with the egos and emotions of the performing world.

Last year I was invited to teach & perform at an improv theatre festival in Wurzburg, Germany! I felt like this was a career high and wonderful recognition of the skills I have developed over the last 15 years.

This year with Understudied I am starting off with a labour of love and I am just about to start rehearsals for a Melbourne International Comedy Festival show.

Could you tell us about the upcoming show Understudied at The Butterfly Club – what is the show about and what prompted you to create it?

Each night the show features characters inspired by the second string of the film world. We all know the names of the big stars – Judy Garland, Fred Astaire, Gene Kelly – but their films were fleshed out by hundreds of supporting roles off stage and on. These characters can bring to life their fantasies about what might have been and really play with the audiences’ knowledge of the era. I have had the idea for a one act play bubbling away as a vehicle for a character I created –Marzipan O’Malley – who is based on child stars like Judy and Shirley. Just as optimistic but less talented!

What’s been the biggest challenge in putting this show together?

Choosing a cast- there are so many talented  improvisers in Melbourne – and I can’t have them all in the show- so I had to leave out a couple of great people I would love to work with this time around.

What do you hope audiences get out of coming to see Understudied?

I hope they are transported to America and that familiar glamorous world of movie making, but come away wondering what was fact and what was fiction. I want them to care about our characters as flawed as they are, and definitely enjoy a few surprising moments and chuckles.

Do you plan to continue in the industry and if so, what are your hopes and dreams for any future shows?

I would like to keep building up the improvised theatre scene in Melbourne,  keep producing shows that give me a chance to grow as a performer and hopefully take the show to other cities and perhaps New Zealand as well!

The Butterfly Club is such a marvellous supporter of independent artists in Melbourne and they make presenting shows like this completely possible!