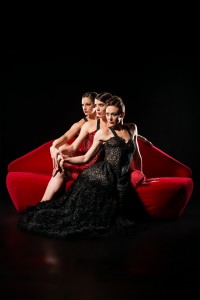 Natalie Weir has been the Artistic Director of Expressions Dance Company for seven years now and is currently touring her rendition of the classic opera Carmen which she’s aptly named Carmen Sweet. I caught up with Natalie and found out how her career in dance and choreography and how she’s captivating audiences from all backgrounds.

Can you tell us about your career so far in dance?

I started off wanting to be a dancer and by the time I got to QUT where I studied I discovered that I had a talent for choreography and so started to pursue that really early in my dance career. I actually stopped dancing at the age of 18 to pursue choreography full time. So I started doing a lot of small works, and actually one of the first commissions I ever had was with the company that I am now artistic director of, Expressions Dance Company. Things really took off after a while, I was choreographing for Expressions Dance Company and Queensland Ballet became interested, West Australia Ballet and Australia Ballet took me on as choreographer. Then I began a freelance international career and worked with companies like Hong Kong Ballet, Houston Ballet, American Ballet Theatre, and Singapore Dance Theatre to name a few. I started to want something more from my choreography, for it to have more of an impact and to have a group of dancers that I developed with and who understood my work. Then the position of Artistic Director at Expressions came up and I applied for it and here I am. And so now I’m in my seventh year as Artistic Director and I choreograph most of the work and I love it. It’s fantastic, I have six fantastic dancers and we choreograph all kinds of different pieces for our annual program.

So do you work with the same group of dancers each year?

Dancers do come and change. In the seven years there’s been quite a significant change but in the last five it’s been more even. The piece you’re seeing is created with a group of dancers that I have worked with for a really long time and we have a shared history and they have a great understanding of my work both in it’s physicality and it’s emotion and it’s artistry.

So how did Carmen Sweet come about – did you collaborate together or is that something you created yourself?

With all of my work with the dance company it is very collaborative. I don’t tell them what steps to do, I tell them more about the concept of the piece, the themes, emotion, or the images I might have. So it ends up being like a conversation between me and the dancer and the production developed through my directing like that. So that in itself is very personal and is quite a unique way to create the movement and the characters. This particular work, Carmen Sweet, is part of a bigger vision for Expressions Dance Company. We have works that are for a big stage, so that means to tour them that they’re big works and need a big set so they’re expensive to tour, but we wanted to have a group of works that build audiences and that allow us to tour nationally. So Carmen Sweet originally came to me through the Queensland Symphony Orchestra who approached me with the music and asked if I liked the music and if I would be interested in creating something on my dancers to perform in front of the Queensland Symphony Orchestra with the music live. It’s very witty, it’s dramatic, it’s fast-moving, so I was really inspired to create the work itself. That was really successful and it wasn’t for a specific dance audience, it was more of a general audience, such as music lovers, dance lovers, and the general public who came along to see the orchestra and the dance. So I was then inspired to take that work into our repertoire and redevelop it. As a work that had a real accessibility; a story that most people knew or had at least heard of, but still could create something with a bit of a twist and was very contemporary and had amazing contemporary dance but was followable – and so I put it together a bit more and we then performed it in Brisbane and we’ve taken it up to Cairns and now we’re on a national tour of 18 venues. The response has been overwhelming and people have been really excited to see it. I really stripped the story back, it’s known as a raging opera, but the essence of the story is a love and jealously/revenge story. It’s very human. The main character, Carmen, is a great heroine, and she seemed so complex as a character I decided that I would have three dancers portray different parts of her, her age but also her personality. That’s worked really well, it’s an unusual twist to Carmen, so you see three women kind of becoming the one. The older woman, she is the matriarchal, deep-feeling Carmen. The younger one is the more free-spirited, untamed, abandoned Carmen and the middle one is a more mature, sensual, and dangerous Carmen.  They play between the two main men who are the bullfighter and the soldier and that’s where her love is torn. The third man is the fortuneteller and he’s the mysterious person who reminds her of her fate which is to die at the hands of the soldier if she continues down a path. It’s quite fraught, it’s very passionate and dangerous but very beautiful. It’s really physical and that’s what people get excited about. The story is followable but it has quite a few twists and turns. It still has all that humanity which is why I love it so much, none of the characters are perfect human beings and they are all flawed.

So where have you toured so far?

They’re in their third week now, and we opened in Mildura a couple of weeks ago. We’ve been around the outskirts of Melbourne. It’s a massive tour with eighteen venues so we really do cover a big amount of territory in the eight weeks that we’re away.

I didn’t realise it was such a big tour. Are you looking forward to heading to the Riverside Theatre in Parramatta?

This will be the second time we will have been there. We originally came there a couple of years ago and it was such a great venue. We did R&J which is my take on the Romeo and Juliet tale, again an accessible story but with a twist. So that’s the kind of works that we’re trying to tour to. With the hope that the audiences we build will come and see our other works as well.

So do you have a range of both popular works and experimental works during each season?

Yes, we try to cover it all. We have seasons that are more experimental and more edgy, which are usually more made up of choreographers that are commissioned and are emerging choreographers who are still finding their style but have a very new vision and great things to say. Then our big works, which we call the signature works, have been a series of works of mine that play at the Playhouse and they’re larger scale works with a bigger set. Sometimes I tell a narrative, but I also do more abstract works as well, such as Seven Deadly Sins which we did this year which was very successful. Where the Heart Is, which was our first one, was about a young man returning to his family home and sort of pulling memories of his mother and father and family from beneath the floorboards. All of the works usually have live musicians and are highly emotional and physical and really show what our style is and some of those works we tour. Carmen is a smaller work for touring and so that’s why we’re able to tour it so freely. It’s really about the dance and the emotion. We can really get out and take it to places that don’t often get dance. I feel like we breach a bit of a gap in these works as it’s not classical ballet but it still has that story element mixed with contemporary dance so it bridges that gap. It’s not contemporary work that is hard to access, but it’s still contemporary dance.

Some people might not know much about dance, but it seems like they can still appreciate your work because of the way you’re presenting it?

That’s how we capture a new audience because they come in for the story and then once they see it they are hooked. It’s a way to grow audiences and to get people to come into the theatre. The serious dance lovers come along but we get people from all walks of life, even plumbers, as well as the theatre audience that cross over as well. It’s important that it’s still enjoyable and has an accessibility, otherwise it can seem to just be a foreign thing that people tend to be frightened of.

To find out more about the tour of Carmen Sweet, click here.

One thought on “interview with natalie weir: artistic director of expressions dance company”