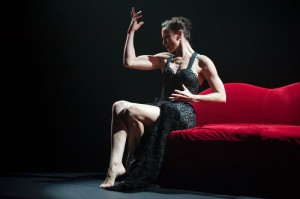 For two days only, Expressions Dance Company brought their latest production of Carmen Sweet to the Riverside Theatre in Parramatta. As part of a national tour of the simple yet evocative production, the short stint in Parramatta proved fruitful with a packed house and a satisfied audience.

I had a chat with the Artistic Director of Expressions Dance Company, Natalie Weir, before attending the show. Weir explained to me that her role as Director and Choreographer focused on collaboration with her group of dancers, instead of merely giving direction. She also explained that Carmen Sweet is a product of a larger show that was previously put on at the dance company’s home base in Brisbane, which included a live orchestra during the performance. From there, Expressions has toured Carmen Sweet all around the country to various locations both big and small. However, because of the sheer volume of players in an orchestra, Carmen Sweet is presented to us without live music but instead with a recording of the beautiful and haunting score.

Weir’s rendition of the classic opera Carmen takes on a modern-day twist in this production as we are introduced to three versions of our protagonist Carmen. When I heard from Weir that this was how she was approaching the piece, I was excited to see how it would develop on stage. The idea of showing us the many complicated layers of our main character seemed to be something that was not worth missing.

With grace and excellent craft, the dancers emerged and fell away as the story went full throttle. We are introduced to Carmen and her various personalities and are then taken deep into the story of love, jealously, betrayal, and death. It was clear to me that the dancers were talented and had a back log of movements at their disposal, of which I could tell were expertly crafted by the performers and Weir. However, even with the elegant staging, talent of the performers, and the engrossing music, something fell short in the piece halfway in. Without me realising what was happening, I suddenly lost interest, only to regain it with some effort as the show concluded.

With further thought on what had happened, I realised that, although an excellent idea, having three dancers portray one character was exhausting for the audience. It became a game of constantly being introduced to each part of Carmen and then re-navigating your position and feelings towards her. Even with the choreography so excellently weaving the three Carmens together in such creative and unusual ways, there was a point in which it became difficult to continue to appreciate what I was seeing.

This is a shame, because overall the piece was expertly produced and carried through. The only lacking was that an idea was formed and in its conception it somehow lost its essence, which was only regained near the end when the plot of Carmen began to emerge with more strength than ever. For dance and performance lovers I would definitely recommend this beautiful rendition, however for the average theatre-goer or for those not knowledgeable about dance, this may be a challenge that you are not up for.