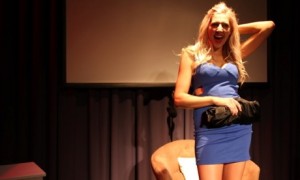 There’s a new one woman show in town and it’s just jumped to the top of my ‘must see’ list! Handle It, written, produced and performed by the very talented Laura Jackson, tackles the dirty side of the internet in what promises to be a compelling and witty exploration of sexism, social media and male-female relationships.

I caught up with Laura to find out more…

Hi Laura, welcome to Lip! tell us a little bit about yourself.

Thank you so much for having a chat with me! I’m Laura Jackson – I’m a 26 year old actor and writer and… I care about women! I really do. I’m really passionate about opening up conversations for women, and making sure young women’s voices are heard. The way I do this, is particularly through the performance of a play I’ve written called Handle It which I wrote as part of my Masters in 2011 and from there it’s just grown! Last year it had a big rewrite and I changed around quite a lot of things, but still preserved the essential core of the piece, and it had several successful seasons last year in Wollongong and Sydney, with a sold out season in the Sydney Fringe and a fundraiser for the UN Women, which was absolutely incredible. The most amazing night. We had two wonderful guest speakers Augusta Supple – a brilliant director, feminist and writer herself, and the fabulous Tracey Spicer who has had more than 1.2 million views on her Ted Talk “The Lady Stripped Bare” and who both come along and chatted about important issues for women & their experiences. This year the play is currently showing at the Adelaide Fringe, and then heads off to Canberra in March and Hobart in December (and maybe some more cities to come!) so it’s a really exciting time for me, when it feels like this work is starting to breathe a bit of a life of its own.

Handle It sounds great, what is the premise and key themes?

Handle It tells the story of a university student who has compromising pictures of her put up onto Facebook without her permission. So it’s quite topical at the moment. These are issues we are seeing regularly on the news: the internet and technology are so pervasive and consuming and part of our everyday lives. What makes the story progress is that the photos themselves progress: they get turned into a “meme” and are continually shared until they go viral and actually end up on a porn site, demonstrating that out-of-control nature of material online. The further complication is that you find out very early on, that Kelsey Armitage, the protagonist, has also been assaulted: where the physical assault is worsened by the continued humiliation through the online ‘assault’. I play six different characters through out the play, all of which have their own perspective on the unfolding events. Kelsey, about whom the story revolves, is absent throughout, until the end when she enters and undresses on stage, symbolizing a reclaiming of her body, whose ownership of which was taken from her without consent.

Do you hope the work will educate audiences on the darker side of male-female gender interactions in an increasingly technological world?

I think theatre has a powerful role in presenting audiences with material that provokes them. I believe audiences come into “Handle It”, and any show, with a lot of prior information: they know what the world is like. What they see in “Handle It” is actually very familiar. Which in a way is very concerning. I hope audiences leave thinking about those male-female interactions. I hope they leave thinking: What can I do? How can I support the women in my life? How can I listen to the young women in my life? How can I respect them? I guess Handle It isn’t supposed to present a “moral” that audience take away, because I think audiences are too smart for that kind of… spoon feeding I guess! And these issues are too complex! The way I see it, it’s meant to open conversations, give people a chance to talk about these issues and interactions. I love performing the play, but some of the most amazing times have been when audience members come up to me afterwards and say “ok, so what do I do?”

Often, the sexual shaming of women online is a reflection, and perpetuation of the imbalance of power in male-female relationships, how is this issue of power explored in your production?

It is an ongoing perpetuation and sometimes so ingrained that we carry on with these behaviors that further perpetuate that imbalance without even realizing! The first character I play is a male character actually – and he is lamenting the fact that he is being blamed for the fact that the pictures are up on Facebook when he didn’t actually do put them up – his friend got hold of his phone and put them up… however the whole time, he is using language which describes Kelsey and women in general as objects, and he honestly doesn’t realize he’s doing anything wrong. Then at the end of the monologue, he sends on one of the pictures via text message to his mate on the phone. He’s an interesting character, and I don’t want to give away too much in relation to him, but there’s a bit of a twist with him and the power play between him and Alexa who is the character who directly follows him is interesting. Alexa is probably the archetypal “young feminist” in the show: she’s a fiery older sister, she’s very passionate, she’s concerned about Kelsey being around these guys. It’s an interesting dynamic.

How do you think the issues explored in Handle It reflect male-female interactions in an offline environment, and how do they influence them? As I said,  you soon find out with Handle It that Kelsey was actually assaulted, so it’s just as much about issues between male-female interactions in an offline environment as an online environment.  I think they are inextricably linked. It’s naïve to think we can separate our online lives with our offline lives. In fact I think it’s a real problem – the way some people feel like they can hide behind their keyboards, and become a completely different person, and say/type all sorts of horrible things that they might never say in their offline lives. So I’d say they certainly influence each other, and in terms of the way Handle It influences offline interactions, I think it comes down to the fact that at it’s heart the play is about a young woman doing her best to cope/ to “handle” what has happened to her, and that’s something that we all experience in our offline (and online) lives.

Do the issues presented in Handle It reflect your own experiences of online, social media facilitated interactions?

I think if you’re a woman online, you’ve probably faced a bit of backlash, especially if you’re outspoken. I do find it sad that the things I’ve faced the most aggression about, whether anonymous, or trolling, or whatever the case may be, are usually when I’ve been posting articles, or trying to raise awareness for women on an issue. Sometimes people get online and say things with more venom that they intended… I don’t know if that’s much of a a justification. Fortunately “Handle It” doesn’t reflect purely personal experiences; “Handle It” is the culmination of many friends’ experiences and of course a lot of research. The sad thing is, nearly every woman I know, has experienced, or knows someone who has experienced something like the events in Handle It.

You began to strongly identify with feminism whilst in Las Vegas, can you tell us more?

I think I always knew I was a feminist… I just didn’t know what to call myself. I’ve been so strongly identified about it now too for such a long time since then, that it’s strange to think that I was ever unsure! It makes perfect sense to me, to support the oppressed, to break down harmful structures. I am completely baffled by the women against feminism movement. To me it speaks of privileged young white women who are very comfortable, speaking of something they understand little about and totally undervaluing the work done by women before them to give them the rights that make their lives so very comfortable! In Las Vegas, I was confronted by the barrage of objectification on every corner. I watched girls dancing on poles, and walked past brothels and constant advertisement that sold products using women’s body parts… and you only have to see the play to know that I am no prude!!… but suddenly I just couldn’t bear to look at the way women’s bodies were reduced to mere commodities. I felt like I needed to do something about it.

Tell us about the process of writing and producing a one woman play like this?

It’s been an amazing, difficult, heart-wrenching, soul-searching, eye-opening, incredible experience. And the journey is still continuing. The play continues to grow and so do I with it. I’m always looking for ways to nuance it further and find new topical references to include as the world moves forward. Writing it was a really rewarding experience, as it gave me an opportunity to tackle something that I am very passionate about. For the same reason performing it and discussing it with audiences allows me to continue that path. Producing the play can be a tough gig. When it’s just me, trying to get the world out about the play and these issues, it can be a bit tricky. I’m very fortunate to have a wonderful support network, who are not only totally behind me, but also believe in my work and in the message I am trying to convey with Handle It.

What advice would you give to young women experiencing similar issues as your character in Handle It?

I think it’s in the title. You can handle it. Sometimes it feels like things are out of control or it’s all too much. But women have a certain power that maybe has been untapped to a certain degree in the past. But you are strong and you can handle it.

Is there anything else you would like to tell us about the production, or your experiences writing it? I think it’s so wonderful to have the support of publications like Lip – so thank you for having me! [It’s our pleasure! – Ed]. If you’re interested to see the show you can check it out at the Adelaide Fringe, The Street Theatre in Canberra and The Peacock Theatre in Hobart. There will be more seasons to come in other cities so if you’re interested to stay in touch you can follow me on Facebook or Twitter.

Handle It is showing at the Bakehouse Theatre in Adelaide, 16th – 21st of Feb; The Street Theatre in Canberra 13th – 15th of March and The Peacock Theatre in Hobart, 18th -19th of December.