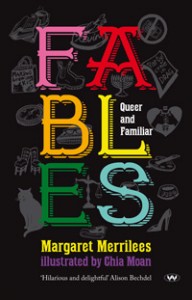 Fables: Queer and Familiar follows two lesbian grandmothers, their family and friends, and how the interact with the sociopolitical climate of Australia. The stories, written by Margaret Merrilees and based on her radio series Adelaide Days, deals with Australian politics, environmental issues, and LGBT literature.

Set in modern day Australia, Julia and Anne are two grannies who are still fighting for women’s rights and marching for Pride. Activists since youth, they’re involved in all sorts of mobilisations and campaigns. Their children and grandchildren continue the family’s spirit of protest.

It’s been thought that this dynamic is an ingrained trait in same-sex families. It seems that the pledge to start a family would be different to hetero couples: the yearning to have a family must be more purposeful, considering the legislative and societal stigma against this. According to Abbie Goldberg from Clark University, gay parents are more committed to their children on average because every single one chose to become a parent, as opposed to the 50% accidental pregnancy rate among hetero couples.

As well as this, support and understanding in the case of bullying and maltreatment is another feature of gay parents. Dr. Simon Crouch, lead researcher of The Australian Study of Child Health in Same-Sex Families, is inclined to think that same-sex families have to cope with bullying and homophobia and that impacts the way they connect with each other. “If a student experiences stigma at school, the families are generally more willing to communicate and approach the issues, resulting in a closer family dynamic.”

In this study, it was also observed that in homosexual families the house roles are equally distributed. “What this means is that people take on roles that are suited to their skill sets rather than falling into those gender stereotypes, which is mum staying home and looking after the kids and dad going out to earn money. What this leads to is a more harmonious family unit and therefore feeding on to better health and wellbeing”, Crouch said.

Merrilees doesn’t broach this subject, but her depiction of a same-sex family normalises their domestic life, when mainstream society would deem it unusual.

Of course, the collaboration of illustrator Chia Moan broadens our understanding of this family. Her drawings, which appear at the beginning and end of every chapter, are cartoonish and entertaining, parodying the most whimsical part of the chapter by depicting a character and a phrase playfully out of context. On the other hand, I did find it noticeable that Moan draws all her lesbian characters with short boyish hair, thus contributing mostly to the lesbian stereotype.

Fables: Queer and Familiar is a lighthearted, odd and delightful novel about unconventional families. It depicts youthful rebels in old age, and normalises same-sex families.