lip lit: from the heart: women of letters 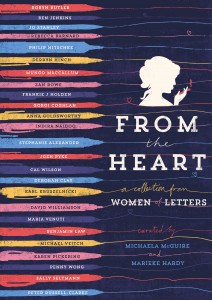 Since its first incarnation at Melbourne’s Trades Hall in 2010, Women of Letters has toured the world to sold-out audiences. Curated by Marieke Hardy and Michaela McGuire, its original purpose was to encourage women to read aloud letters set to a specific theme, directed at a live audience. It has evolved to include a Men of Letters variant and has several accompanying book anthologies, but the underlying principle remains the same: allowing a gathering of people to speak intimately without reservation.

In From the Heart, the latest Women of Letters, we are treated to not only a veritable who’s who of creatives and public figures, but to a diverse cross section of women and men. Women of Letters has a strict policy of no photography or video at the events, which allows the speakers to safely unburden themselves, and for the audience to respond openly in turn. From the Heart is comprised of several differently themed letters, all reproduced with permission from the original speakers.

The letters in this collection are diverse in tone, delivery, and theme. Not all letters are written for a person. Some letters are about songs, books, or words of advice. Despite the fact that these letters aren’t directed toward people or life-changing events, they are still impactful. We all, likely, have a piece of music or artwork that has affected us on a profound level. It is this universality that appeals: no matter how seemingly mundane the thing being written about, the letters often encourage a feeling of nostalgia or identification. Which is not to say that these letters do not have significant resonance – Ella Stiles’ ‘Dear Golden Scalpel’ metaphorically cuts, through its candidness and poetic language. Pinky Beecroft’s ‘Dear Holy Bible’ offers a revised, more tolerant and peaceful version of the bible, promoting a consideration of the far-reaching effects of religious texts and their interpretations.

Contentious media personality Derryn Hinch pens a letter to his former wife Jacki Weaver, and addresses his enduring love and affection for her in a moving and intimate portrayal. He strips away the façade of fame from the Animal Kingdom actress and reveals her to be a complex, passionate, and loving woman. Penny Wong debates the pros and cons of a life in politics, and her strength and determination combined with her honesty surrounding the difficulties of choosing such a career is inspiring. Feminist scholar and political activist Sheila Jeffreys discusses the intricacies of music and humour within the LGBTQ feminist community, and reveals the often over-looked, and in some cases forgotten, sense of humour in feminism.

The section entitled ‘To My Other Half,’ is an interesting variation on the Women of Letters format. In it, the speakers address their significant others, who are given the chance to do the same in turn. Playwright and journalist David and Kristin Williamson recount the history of their relationship, relating the everyday aspects of marriage with affection and adoration, and frankly discussing the complicated beginning of their coupling. Benjamin Law and partner Scott Spark’s letters to one another are interspersed in a hilarious collaborative format. They each relate occasions when either party could have ‘legitimately dumped the other.’ The couple’s ultimate acceptance of each other’s quirks and foibles reveals an intimate portrayal of love and long-term commitment.

Women of Letters is, at its core, a live event. In this medium, a sense of community and camaraderie is evoked. Speaker and listener can laugh and cry, and can do so in a safe environment. Leaving the venue afterwards, a feeling of catharsis is often attained. There is something uniquely special about this format, something that cannot quite be replicated in any other medium. But the books, From the Heart included, offer something else. Obviously, they provide the reader a chance to feast on the writers’ words in a tangible, visual way. They also allow the words to be cherished and reread, wherever and whenever it is desired. And if the letters expressed in the books can have emotional resonance even when conveyed through a less direct medium than a public reading, they are powerful letters indeed.

From the Heart: Women of Letters ed. by Michaela McGuire and Marieke Hardy