lip lit: the shape of water 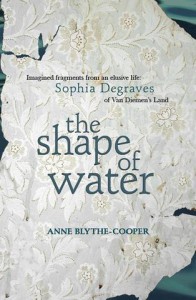 With the rigorous research involved and the potential for disagreement and criticism, what could be more difficult than writing the biography of an historical figure?

The answer? Writing the life of an historical figure on whom the historical record is completely silent.

In the latter case, academic rigour must be balanced against a refined imagination and powerful historical empathy to create a work of fiction which could easily pass as biographical.

Anne Blythe-Cooper has achieved such a balance in her thoroughly researched and beautifully crafted novel The Shape of Water. As a work of historical fiction, Blythe-Cooper has thoughtfully imagined the life of Sophia Degraves as a colonial wife and mother.

The historical record is loud on the life of Sophia’s husband, Peter Degraves, pioneer of Van Diemen’s Land – now Tasmania. Probably his most remembered achievement, and that which has lasted most prominently, is the Cascades Brewery. Its beer is still consumed. The brewery was cofounded by Peter Degraves in partnership with his wife’s cousin, Hugh MacIntosh. Degraves persevered through multiple prison stays, failed ventures and hardships, most of which are recounted in the historical sources.

Not recounted is the parallel life of his wife, and her hardships and ventures. Blythe-Cooper paints a portrait of Sophia Degraves as a determined, patient woman, a devoted mother, and a supportive, but not submissive, wife. During her several decades of marriage to Peter, Sophia gives birth to countless children, not all of whom survive. The premature deaths of her children are treated sympathetically and kindly by the author. The novel begins in England with Sophia aged 16 and moves through her life with selected – and imagined – snapshots of significant moments. Sometimes the fragments are lengthy and deal with years of Sophia’s life at once. At other times, they are brief and momentous.

The book’s title itself is suggestive of the elusiveness of Sophia’s life. History struggles to identify who she was, her thoughts and battles, her hopes and disappointments, much like attempting to capture the shape of water. Blythe-Cooper maintains the theme of water and its movement and changeability throughout the novel. The journey by sea from England to the new colony is significant in Sophia’s life since, during this trip, more than one of her children die and the daughter who will ultimately inherit the Degraves estate – albeit via her husband – is born on the ship, aptly named the Hope.

The novel explores other concepts too, including the experiences of convicts and the social disparity present in the colonies. The place of women in 19th century life is treated carefully and not anachronistically. Sophia attempting to define herself in relation to her husband, and to carry on in his absence during his stints in prison are believable scenarios. And statements like, “How we women define ourselves by function!” are not out of place.

Early in the novel, before her marriage, Sophia comments on “how often have I meekly taken a cup pressed upon me by Peter (having the best intention!) with milk and sugar to suit his taste and not my own?” Such a small everyday action seems in fact the essence of the relationship between them as husband and wife for the rest of Sophia’s life and marriage. Degraves is crafted as an ambitious and proud man with endless energy and an insatiableness for innovation, sometimes at the expense of his family. Sophia’s willingness to carry her family through the more difficult colonial experiences is testament to her strength and contribution to the success of the Degraves family.

The setting for most of the novel in the Cascades of Tasmania is beautifully crafted. Blythe-Cooper’s own knowledge of the area and its natural landscapes is evident in passages from the novel which are descriptive without being laborious. The leaves of young gum trees are described as “chubby” alongside the “grandfather green of the old gums”.

The voice of the novel is unquestionably Sophia’s, recounted in the first person. It is consistent and eloquent, contributing to the portrait of Mrs Degraves as an educated, benevolent woman. The prologue and final chapter also give voice to her daughter, Deborah, who inherits the Degraves empire, and bookends the novel nicely.

The story’s temporal field is deftly handled too and the chronological approach is successful. Time markers are used, although perhaps not quite frequently enough, to demonstrate years and months passing between the fragments of the life the story recounts. The consistent use of the present tense quickly becomes comfortable as the reader adjusts to Sophia’s voice and the story moves along at a carefully controlled pace.

Although the life of Sophia Degraves might be as transient as the shape of water, this novel about her, eloquently written and rigorously researched, is not. In fact, The Shape of Water is an important piece of Australian historical fiction about a woman who, like so many voices from below excluded from history’s pages, has a story to tell.

The Shape of Water by Anne Blythe-Cooper