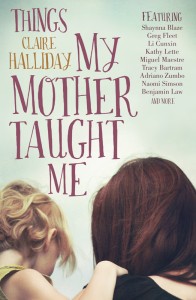 What is the role of a mother? And how does the relationship between a mother and her child shape that child’s life and actions? What makes some children grow up to be like their mothers, while others are motivated to turn away and do something completely different?

The new book Things My Mother Taught Me seeks to examine some of these questions, by featuring the stories of high profile Australians, including leader of the Australian Sex Party Fiona Patten and writer Benjamin Law, and their mothers. These stories have been told to and lovingly transcribed by non-fiction writer Claire Halliday. The chapters cover a variety of upbringings—some are warm and fuzzy with a touch of humour, while others make for difficult reading, due to familial experiences of sexual abuse, suicide and alcoholism.

There are some common threads that run throughout the memoirs. In particular, the immigrant experience of women, who often followed their new husbands to a new and strange country, is prominent in a number of stories. Writer Benjamin Law and comedian Greg Fleet describe growing up with mothers who had moved with their husbands for a better life, and were then required to make a single life for themselves in Australia. This takes a certain kind of courage that is seldom acknowledged.

More importantly, many of the storytellers in this book are forced to reflect upon their own role as a parent. For better or for worse, how has their experience being mothered shaped the way that they parent? Chinese-Australian ballet dancer Li Cunxin admits that he initially found it nerve-wracking to even send his daughter to school camp. In comparison, at age 11, his mother let him leave the family village for a dance academy in Beijing, an act that he can now truly appreciate as a parent. Jacqueline Pascarl, who had her own family drama when her ex-husband kidnapped their children, was inspired to do her best as a mother by her horrific childhood in which her own mother was initially absent and then abusive. Claire Halliday has carefully woven the experiences of parenting between generations to add another layer to the stories.

Sadly, women in particular often note that their mothers didn’t have ‘big’ lives, offering it as inspiration for how they wanted to be different from their mothers. Interior designer and TV personality Shaynna Blaze looked at the life of her mother, who had little ambition to travel or learn, and aspired for more. The mother of make-up artist Napoleon Perdis immigrated to Australia at age 17 from Greece after a traumatic childhood, which left her with no dreams, just a ‘desire to survive’. Alternatively, author Kathy Lette’s mother worked in a powerful position when she was growing up, which Lette says ‘ingrained’ into her that women are capable of anything.

Similarly, the book is also partly an ode to the often unspoken and underappreciated role of the mother as nurturer. Li Cunxin describes his mother, and her laughter in particular, as the ‘glue’ that held his family together, despite his father doing the manual labour to feed their family. Napoleon Perdis’s mother was able to pacify his traditional father, who was initially uncomfortable with his son’s decision to pursue a career in make-up. In this sense, Things My Mother Taught Me has more to say than just retelling individual experiences. It implicitly examines the role that we expect our mothers to play.

Author Clare Halliday, who has carefully documented these stories, leaves her own story to the end of the book. She had a loving relationship with her mum early on, but began to rebel when she discovered she was adopted at the age of 11. To her disappointment, Halliday’s birth mother was largely disinterested in making contact with her. It’s fascinating to delve deeper into the author’s own experience and is perhaps the reason behind Halliday’s decision to write this book, and provides a neat personal touch.

Things My Mother Taught Me is a great book to dip into at various moments, with some stories hitting the mark better than others. While each chapter is interesting in itself, it’s the common experience and expectations of the mother–child relationship that reveal a lot about the role of mothers in our society.

Things My Mother Taught Me by Clare Halliday