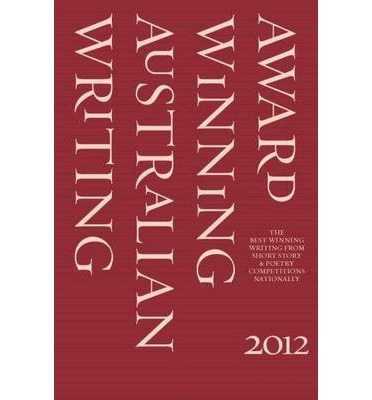 A few years ago, Melbourne Books began compiling the country’s prize-winning stories and publishing them in an annual collection called, Award Winning Australian Writing (AWAW). Last year, they added poems to the mix. It’s such a wonderful idea I don’t know why it wasn’t done sooner. The series is now in its fifth year. There are fifty stories and poems in AWAW 2012 and every one of them was awarded first place in an Australian writing competition. One of the series’ main goals is to help raise visibility for prize-winning writers and their work. I must admit though, I didn’t know this series existed until a few months ago, which is a real pity; firstly, because AWAW is a great publication that deserves to be widely recognized, and secondly, because I feel like I’ve been missing out.

The book is worth buying for Mark Tredinnick’s ‘exquisite’ foreword alone, and the introduction by series editor Adolfo Aranjuez raises some important questions, too, such as: Australians are avid readers and we have a healthy publishing industry, so why, then, is it so hard to get a collection of short stories or poems published in this country? Aranjuez suspects that the concept of ‘literary’ writing might deter the average reader, because it’s perceived to require more effort to read literature than general fiction. Yet, I found AWAW to be a pleasure to read and I consider it much easier to commit to an assortment of poems and short stories of only a few pages each rather than a full-length novel.

There’s something for everyone in this collection, and it provides bite-sized pieces of reading that are perfect for slipping into busy schedules. Most of the entries left me wanting more, but on the rare occasion when a particular story or poem didn’t move or excite me, it didn’t matter, because often the very next page would knock my socks off.  I thought all the stories were accessible, although a couple of the more experimental poems might challenge some readers. That’s possibly why poetry collections seem even less likely to be accepted for publication than short stories. In AWAW 2012, short stories make up 62% of the collection and poems 38%, which looks to confirm my suspicions that there are not as many opportunities for poets as there are for writers of fiction.

AWAW 2012 presents an eclectic mix, with many different writing styles and topics. It showcases writers at different stages of development—including young writers—and each of them has undeniable talent and something unique to offer the reader. Although I felt a few stories lacked in originality and spark, others were positively dazzling—with strong voices, lively expression and captivating plotlines. This variety is likely due to the wide range of competitions AWAW accepts work from; some are smaller in scope, like the ZineWest competition, which is open only to Western Sydney writers, and others are much larger, like The Age Short Story Competition, which is open to writers nation-wide. That’s not to say that the lesser-known prizes don’t present some absolute gems, especially those for writers with niche interests, like the Cyberpunk, Horror and Speculative Fiction competitions. It was wonderful to read works that were surprising and imaginative, and written in genres that I wouldn’t normally pick off the shelf. Elizabeth Gatens’ The Glitch Doctor was fantastic, as was David Conyers and David Kernot’s Winds of Nzambi. Both these stories created the most fascinating worlds, as did my personal favourite from the book, Jack Nicholls’ endearingly quirky The Statues of Melbourne.

The fact that AWAW presents the winning poems and stories from smaller competitions alongside those from bigger ones is, I think, terrific. It supports those smaller competitions and recognizes the tremendous service they provide to local literary communities. It also recognizes that there is a diverse range of writing opportunities in this country that caters to a spectrum of writers—each with distinct areas of interest and levels of expertise. In this way, the anthology acts like a panoramic snapshot of the writing industry.

Still, I would like to see the scope of the book widen even further, because award-winning Australian writing can also be found outside of the country. It would be great to see those Australian poems and stories that have won international competitions included in this collection, too. Mark Tredinnick, who wrote the astoundingly sensitive, honest, profoundly inspiring and yet equally practical foreword to this year’s AWAW, has won major prizes in Canada and Wales over the past two years. It would have been wonderful to see his poem, Margaret River Sestets, which won the 2012 Cardiff International Poetry Prize, as part of this volume.

Eventually, he would come to like the way she clutched at her chest when she talked, like she was trying to stop her heart from falling out.

Kerrie McCure’s Wings presents a chilling vision of a character dealing with abortion:

I dream that a faceless baby with wings appears at my window in the darkness. It flies towards me and smashes itself against the glass, panicking like a bird trapped inside a room

Bram Presser’s Crumbs reads like a cross between a black comedy and a fairytale, whereas Skye Loneragan’s stunning poem, Rushcutters Bay (or, I Can’t Decide), reads like an impressionist painting of Sydney Harbour at night, while the narrator contemplates a ‘trembling’ relationship:

After pondering Lisa A. Jacobson’s Several Ways to Fall out of the Sky, I think that this would be my method of choice:

Consider the way gravity swings the planets round, pulls tides up
shores, draws blood from women.

And Ron Pretty’s Theseus at Eighty is both witty and moving:

I am in the third level of irritation
in the Library of Forgetting.

Janeen Samuel’s Behold the Lamb was so delicate and tragic I wanted to cry:

smaller than any lamb that ever strayed
– my hand-span only –
yet whole, its jumpsuit
of tight tiny spirals
sodden from womb and rain,
its hooves butter curls
innocent of earth.

Sarah Rice’s Against the Grain is full of worldly wisdom—‘Many things have a grain best not to go against’. And Joan Kerr’s Dying Languages delights in linguistic grace:

How have I lived without
onsay, to pretend to love,
onsra, to love for the last time?

David Campbell’s do you take this man? manages to be both conversational and chilling at the same time:

what does he mean by take? is it like grasping/clutching/grabbing?
which is what Jason did that night all hands and mouth…

Ultimately, what strikes me most about this collection is that so many of the fiction pieces could be mistaken for non-fiction. The characters’ voices are inherently authentic. Hugh Kiernan’s Iris in Beige and Yellow; Karen Manton’s The Slow Living Diary; Eliza-Jane Henry-Jones’s heart-wrenching Skin on Skin; Gayle Beveridge’s Get Teddy; and Robyn Cadwallader’s The Day for Travelling are among many of the stories from this collection that are so haunting, so honest, so hopelessly and hopefully human—that I think I will never forget. From now on I’ll carry whispers of these tales with me wherever I go, like those snippets of songs and conversation Kirsten Roberts takes home from the party in Night Music:

…. We’ll carry them home in our pocket seams
like sand, each memory a tiny constellation waiting to be discovered
on our pedestrian days.