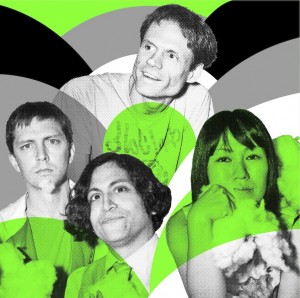 Alternatively, Why You Should ALWAYS Say Yes When A Friend Asks You To Go To A Show.

Last Tuesday night, February 8, 2011, I ventured out of Williamsburg to go to my favorite part of Brooklyn, Greenpoint. I had worked an especially difficult day at my job and was tired enough to the point of considering not going to the live Deerhoof show. But your friends are there in these trying times, and allowing myself to be dragged out to that show was one of the best decisions I’ve made all month.

I had never been to the weirdly small and clubby venue in this neighborhood and was excited to see what it would be like. After you spend enough time in the New York music scene (or maybe New York in general), to which I honestly still consider myself a newbie most of the time, you start to pay attention to how shows are booked and where they’re played and what kind of weird monopolies and politics control the system. It’s not like you’d ever have a hard time finding an obscure band to listen to on a Tuesday night in Brooklyn, but it’s also not always easy to be able to tell what’s going to be worth it and what’s going to be crap. I have a sneaky suspicion that’s how the live music scenes are in most major cities. Since I had never even heard of this club, the newness of everything was enough to keep me interested. I, like everyone else who lives on the New York City, have an insatiable desire to be in the know of what’s cool in culture. Amazingly, the sound at the Europa Club was actually better than in several more popular venues I’ve been. Its small size allowed me to see true indie legends with only about 500 other people.

Deerhoof is an American indie, post-punk, shoegaze-y four piece band with elements of hardcore and classic rock and roll. The band is chiefly known for the juxtaposition of female lead singer Satomi Matsuzaki’s vocals over the “ambient punk” soundscape powered by major drum beats and mellow guitar tracks. Big bands in the independent music world, ranging from Sleigh Bells to Grizzly Bear to The Flaming Lips, all cite Deerhoof as a main influence. While I’ve been aware of the band for quite some time, I’d only consider myself a true fan since summer 2010. At the threat of destroying all my credibility, I’m going to be honest with you all: I’m really only familiar with their hits and most recent release, 2011’s Deerhoof vs. Evil.

All that being said, the show was great. It was sold out, which isn’t exactly surprising considering Deerhoof has been active for over ten years and that February 8th is Satomi Matsuzaki’s birthday. The opening bands were both awesome enough for me to write about and made me not regret coming right as the doors opened. The first band was Buke and Gass, named for its instruments, a bass-ukulele and a guitar-bass.  This Brooklyn-based duo has a really similar vibe to Deerhoof with sweet vocals layered atop complex instrumental backgrounds. I really enjoyed their onstage chemistry and was fascinated by the instruments. Their fresh sound has been noticed by everyone from TimeOut New York to National Public Radio, and they were definitely able to keep even the most serious Deerhoof fans intrigued for a half hour. The second band was a German DJ/drummer duo Ben Butler & Mousepad. These musicians very clearly spoke to the garage-y, synthesizer electronic drum aspect of Deerhoof’s sound.  The drummer of this band, Bastian Hagedorn, killed it throughout most of the set. I’ve never seen a heavy synth DJ with a live drummer that talented, and the juxtaposition was just as fascinating as Buke and Gass’ strange instruments. Although Ben Butler & Mousepad’s synth jams completely differed from Buke and Gass’ experimental showcase, it was interesting to see how both bands had clear stylistic ties to Deerhoof.

When Deerhoof came on, they commanded the stage with the precision and clarity that only comes after years of touring. I especially enjoyed their live versions of “Chandelier Searchlight” off 2008’s Offend Maggie and “+81” off 2007’s Friend Opportunity because it’s only when these songs are live in front of you do you realize the amount of craftsmanship in each level of their sound. Like a lot of shoegaze or post-punk music, Deerhoof can sound a bit all over the place or fade into the background if you’re not paying attention or it’s on low. But, the live show gave these songs a more intense feel that had everyone in the crowd dancing. The older songs blended seamlessly with the new material from Deerhoof vs. Evil, as “Super Duper Rescue Heads!” and “The Merry Barracks” were played alongside classics.

It wasn’t as though you could trace a clear artistic growth through this band’s set – the same experimental elements that were present in the late 90s work was just as apparent in the material from 2011. That’s why Deerhoof is so well-respected among musicians and music fans alike: while they have  definitely matured, their signature style defines both the live show and larger oeuvre. This band effortlessly connected with its fans, both old and new. My favorite part of the show was after the crowd sung happy birthday to Satomi and the band closed with “Basketball Get Your Groove Back” (also from Offend Maggie). My friend and I were singing “BAS-KET-BALL BASKETBALL BAS-KET-BALL” the whole way home.