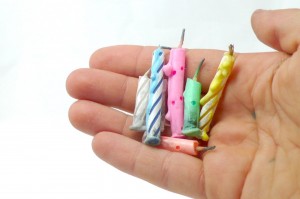 Ad Hoc, a Conceptual New Media artist, is selling her memories in an online auction listing on Ebay, Memories For Sale. Up for grabs are a collection of objects, such as letters, photographs, and one-off items. Every single one represents the good and bad moments of the artist’s life. Lip caught up with Ad Hoc and we discover how she lets go of her attachment to important objects in her life by giving them away to complete strangers.

Can you describe the work to Lip readers?

Well, the description would depend on how you define a concept of work, which negates where one sees the work of the project lying, but I have created an online auction to sell all of the objects of nostalgia that I have kept over the years. I will also be creating two books – one for myself and one for the winner. They will act as an archive with photographs and written recollections of the memories attached to each object.

How do you feel the auction is going?

I don’t have any feelings positive or negative about how the auction is proceeding so far. The decision to undertake the process of giving up these objects to a stranger was the crucial emotional point for me. I am now just making it happen.

The current bid is still quite low, did you expect that? How do you think the amount it sells for will change the work?

I expected everything and anything – it’s the internet – and projects like these usually have quite unpredictable outcomes. Wealthy artists pay marketing companies to create hype and interest in everything they do. If I were in that position perhaps I would have done so too, but as it stands, it has not bothered me that I don’t have the means to do that. I am interested in the process I am going through, and in the dissociated connection I am creating with a stranger – monetary value is irrelevant.

The project will of course retrospectively seem very different dependent on whether the purchase value falls between the polarities of one dollar or one million dollars, but at the end of it all, I will still have done the exact the same thing.

Why did you decide to use an auction format? I’m particularly interested in the financial aspect of this. You chose to exchange the goods for money rather than giving them away, or using any other type of exchange. What interests you about the medium of Ebay?

I have over the years used Ebay quite a few times to undertake works or projects – sometimes publicly, sometimes just for myself.

By co-opting a sale space generally used to turn-over mass produced goods, I am hoping to draw attention to the conditioning in our culture that tells us what to consume and what not to consume; what is okay to sell and what isn’t. I’m also fascinated by the ways in which we as individuals allow ourselves to be so easily corralled and told how to behave in virtual spaces, just like in the physical world. When you push at codes of conduct even a little, it becomes clear quite quickly that the rules which regulate things such as appropriate behaviour, leisure, ownership etc, are easily and quickly blurred.

So many emerging Melbourne artists these days are seeking alternatives to the Artist Run Initiative system, which has its merits, but can feel expensive, extremely competitive, and exhausting. Do you see mediums like Ebay as alternatives?

In short, no. I am a conceptual artist and I use Ebay as a way to enhance a particular message inherent in what I’m doing. If you are hoping to create a place-hold in the commercial art market, selling your work on Ebay would more than likely be a disservice to you. It is all part of the unspoken codes of how art is consumed – you need to jump through the hoops set up for you that prove your authenticity as a real artist – even though so many in the art world claim they no longer believe in the power structure of ideas of authorship. You can expose this pretty quickly as false if you take alternative routes to the public to show your work. The competitive and expensive nature of the ARI system is testament to this.

I would rather be paid one dollar for an experience with an audience or a project I am completely in control of, that I can enjoy for what it is, than spending thousands of dollars on a tiny exhibition room whose main purpose is to end up as a line on my resume, as some sort of marker to the art world that I am one of them.

Memories For Sale functions in an openly capitalist system that has cost me around two dollars in sellers fees, and at this point has been viewed by around 400 people from all over the world. I am also enjoying it and have not needed to negotiate at all any parameters beyond my own for what I wanted to achieve.

How you choose to ‘sell’ and engage with an audience at all comes down to what you value most about being an artist.

The project could be considered cathartic, sure. But I consider all of my activities – even those nobody cares about because they aren’t called ‘art’ – to be a process of constantly becoming, and so my focus will simply shift to something else once this one is over. I am hoping it will help me to lessen my somewhat anxious attachment to my past through the objects that serve to validate me.

Projects I undertake are not therapy. Engaging with any type of therapist is a completely different process than enacting your own impulses in order to challenge yourself. I find it continually frustrating that art and therapy are talked about as though they are interchangeable – they are not. I recommend trying both.

What do you think is going to be the most difficult thing to let go of?

My gut reaction was to say photographs, but I don’t actually think that is true. Probably the weirder or more junk-type items that I know only I will have any significant attachment to. They remind me of strange little moments and times only I experienced.

On the surface, this work seems to share a lot with the artist Sophie Calle. I am thinking particularly of the way she used memorabilia as a central tool in her project Exquisite Pain, and how that project has an element of exorcising the power of those objects. Or her work, the Birthday Ceremony, where she placed all of her birthday presents for thirteen years in vitrines, as a sort-of self portrait. Do you see the parallels? Is she an influence?

I encountered Calle’s work very early on when I was 18 or so – I found Exquisite Pain in a second hand bookstore and I loved it – though it is one of the objects I have let go of over the years.

I have always felt very moved by what she does, but she is no more an influence on me than anyone else – it all runs together eventually. I have been affected and thus influenced by all sorts of things, some which are considered the activities of artists, and many of which are not. I am influenced, mostly, by my own never-ending desire to push things about and see what happens afterwards.

Who would you describe as your influences?

There are too many to mention. Right now I am a little obsessed with Grayson Perry.

If you could have dinner with any person in history, who would it be?

If I could choose instead, I would prefer to understand how to be content with eating alone.

In your Ebay description, you talk about the work allowing you to make new work that you otherwise can’t afford. What would you like to do next?

Ahh, my head is always filled with big ideas and I am interested in so many ways of communicating through making. I am always working within my means and my ideas contract and expand dependent on the opportunities that present themselves to me. So who knows – we will see how the auction ends and I will move on from there.

One thought on “memories for sale: interview with ad hoc”