performance review: stones in her mouth 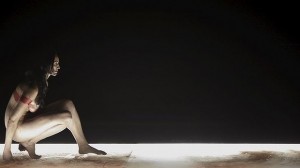 Stones In Her Mouth. Photo: Zan Wimberley via SMH

Leni Ponifasio and his company MAU return to Carriageworks with their Australian premiere of yet another thought provoking work,  Stones in Her Mouth. Like MAU’s 2012 production of Birds With Skymirrors, which explored our relationship with the world in a time of climate change, Stones in Her Mouth is a similarly provocative work. Through the strong Maori tradition of  Moteatea that features women as poets and composers,  the production voices a challenge, and expresses rage and resilience against the apparatus of power, oppression and Western-style feminism

Conceived as a leadership project of young women in New Zealand and across the world, Stones in Her Mouth is presented in six parts and begins with a single voice in the dark, chanting and repeating what seems to be a call to arms.  The performance moves through songs and chants, reflecting conflicts of identity; connection; history; belonging and displacement, before returning to calls for healing and extending a prayer and invitation to the future.  Written and composed by the performers themselves, the songs and chants are haunting and ethereal, expressing ambivalence and frustration whilst also reflecting constant resilience and strength.

The movements of the MAU performers are predominantly rhythmic and purposeful. The dance shifts in texture between each part to create an image of pleading and protest. At times shadows are cast behind the dancers creating a suggestion of gods or spirits of ancestors, implored to for guidance, and larger and more powerful than the performers themselves. Maori Poi are used in some parts and the soft drum-like rhythm and dexterity of the women performing with them, in perfect time with one another, is breathtaking and beautiful to watch.

In the central part of the performance a nude woman enters the stage, a striking red crucifix painted across her naked body.  She walks forward to lie bathed in a white light that becomes almost unbearably bright and difficult to watch. Another performer appears to levitate above her in the shadows. Her movements defensive and imp like, she seems to call a protest or warning, emphasizing her words by throwing handfuls of red dust. The white woman stands and, caught in a vertical stream of white light, shudders, twists and cries out. It is a jarring and uncontrolled moment, interrupting the otherwise rhythmic movements of the work, which speaks of frustration and torment.

Ponifasio’s trademark aesthetic of shadows and light is present throughout and is contrast between a flickering texture in the lighting of much of the work, like firelight or an old black and white home video, played too fast. In contrast a bright strip of white light lies across the front of the stage, concealing and revealing bodies and faces, giving the impression that the performance is not of this earth but something almost mythological. In placing these shadowy ancient images against the sharp white light; and traditional forms of Maori dance and Moteatea against contemporary issues, MAU presents an unsettling and moving image of disconnection from oneself and fear for the future.

Stones in Her Mouth was at Sydney’s Carriageworks from the 28th to the 31st May 2014.