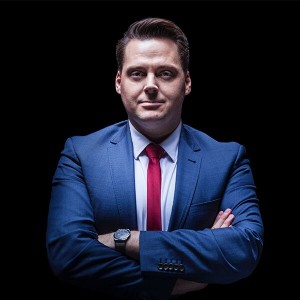 The stark divergence between the left and the right is growing, with party leaders continually pushing boundaries further to the edges. This extremist divide causes unjust and inhumane policies, such as the recent Manus Island standoff. As someone with left-winged ideologies, it is bewildering to see why and how politicians make the personal choice to bestow such cruel policies. This confounding state of being is exactly what Katy Warner’s A Prudent Man seeks to explore. Through a one hour monologue, Warner taps into the inner workings of the far right.

Although presented as a high-ranking politician in damage control, there is an element of candidness to his revelations that mirror an inner monologue. The writing is impeccably threaded through three main encounters: finding a deceased refugee boy at a beach, the assault of a Muslim and a woman being dehumanised for having no sense of humour. Warner’s ability to thread these events to explore the protagonist’s vulnerability juxtaposed against his cruel actions is a highlight of the show. It is testament to her talented writing skills that the script can compel and hold the attention of the audience for the full duration of the monologue.

One risk that concerned me was that the play would only further alienate those on either side of the political divide. But through the skill of actor Lyall Brooks, the humanity of the protagonist is delivered excellently. The highlight of Brooks’ performance is his ability to say overwhelmingly callous lines while still showing vulnerability. While incredibly natural, the detail of his performance makes it obvious that each sentence has been meticulously perfected. As a one man show, Lyall ensures success of the performance through his refined mannerisms, tone variation and captivating emotion.

The monologue begins with compelling commentary on political posturing and “winning the people”. Warner offers interesting revelations on the distinction between public and private political life. The protagonist has constructed every element of his personal life, from having the right number of children to going jogging each morning, in attempt to appear transparent to voters. Through this, Warner shows the extent of construction that goes into appearing relatable and that even apparent trustworthiness can be a political con. Through his constant repetition of “that’s what they want” and “I’m told that people like that”, Warner simultaneously captures the way that politicians are inherently detached from the people they are representing.

Warner also impressively weaves real-life events into her writing. In particular, Warner uses direct quotes from politicians such as Donald Trump and Pauline Hanson. The protagonist also recounts a pony tail pulling controversy, just like that of New Zealand PM, John Key. It reinforces that our politicians are just like the protagonist in the show – their words are structured and rehearsed to best fit with “winning the people” and disarming criticism. Through these examples, Warner also drives in the danger of this extremist conservatism and shows that these sentiments are not just satirical anymore. This rhetoric of sexism, racism and fear has become our mainstream political ideology, and that is deeply frightening.

A Prudent Man is a rare performance, which is deeply thought provoking and enlightening. As well as showing the charade that politics has become, the play shows the real-life danger of extremism and the impact on those caught in the middle. Warner’s intricate writing and Lyall’s refined acting are perfectly matched to produce compelling social commentary that should not be missed.

A Prudent Man is touring in 2018 in Victoria, Queensland and New South Wales. Their next performance is at the Drum Theatre in Dandenong, which you can buy tickets to here.