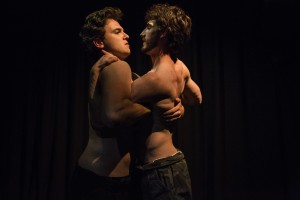 Whilst travelling in Europe in 2011, playwright David Atfield kept seeing the same face in museums- an undeniably beautiful Roman youth, named Antinous, but always unclearly labelled. What began as mild curiosity turned into a three year long journey into the life of a powerful young man, Antinous (Ethan Gibson)- largely unmentioned in the popular histories due to his ‘scandalous’ relationship with the Emperor Hadrian (Nicholas Eadie)- culminating in the self-directed play, Scandalous Boy which will enjoy its world premiere tomorrow night at Canberra’s The Street Theatre. Lip caught up with David Atfield to find out more:

“Throughout history he has largely remained unmentioned, and when he has, it’s been in a really derogatory way portraying him as an evil seducer of Hadrian. He was even accused by one historian of being a ‘shameless and scandalous boy’, which is actually where the name of the play comes from. I think Christian historians, who actually really liked Hadrian as an Emperor, struggled to reconcile this with the fact that he was in love with another man. The only way they could get around this dilemma was to paint Antinous as a villain.”

What is interesting about Atfield’s interpretation of the story of Antinous is, not only is it unusually flattering, it is also told from the perspective of Antinous himself, not Hadrian’s. So who was Antinous exactly? Well, parts of his life are unclear but we do know that he was about 16 when he met Hadrian, who was in his fifties by then, and he died at around six years later, when he was about 22 years old. What makes Antinous historically important however, was not his life, or even his death (the exact circumstances of which are unknown and widely contested) but his deification by Hadrian after his death in 130 CE. The cult of Antinous spread throughout the Roman Empire, encouraged by Hadrian who saw political opportunity in furthering its popularity. The cult of Antinous remained widely popular until its decline in 391 as a result of the Emperor Theodosius’ ban on non-Christian pagan religions.

“The suppression of the story actually made me a bit angry. After delving into his life a bit more I remember thinking, ‘why doesn’t the gay community know about this person?’.”

After receiving a grant from Arts ACT and work-shopped through The Street’s The Hive program, Atfield’s script is now a fully-fledged performance which is described by Atfield as “quite a spectacle”. Don’t mistake Scandalous Boy for a historical drama either:

“Everything is quite contemporary- modern clothes, music, a stylized set….I think it will be suprising!”

Perhaps most interesting for Lip however, is Atfield’s treatment of Hadrian long-suffering wife, Sabine (Emma Strand).

“Like many Roman men, and certainly in accordance with Roman culture which focused on masculinity and saw women as inferior, Hadrian was extremely misogynist and I haven’t shied away from this in the production. Hadrian and Sabine has a political marriage and by all accounts, he was extremely hostile towards his wife.”

To balance Hadrian’s misogyny, and better explore the complex power relations of ancient Rome, Antinous has a very different, much friendlier relationship with Sabine, which Atfield tells me is quite warm:

“I wanted to make sure Antinous wasn’t a misogynist, and this sexism was a real dilemma in Roman culture, there were many strong women but they had to work very hard and face many more restraints than men did”.

Men did however, have many restrictions as well, including within homosexual relationships, Atfield tells me:

“There were strict rules governing homosexual male relationships, particularly in regards to sexual positions which reflected rigid power structures. Hadrian, for example, would have never been penetrated as this would have been emasculating given he was the power-figure in the relationship. The older man was always the powerful figure and often once boys reached a certain age, the relationship ended. Same-age relationships were considered abnormal and were frowned upon”.

There’s a lot to be said about this production, however without giving too much away, Scandalous Boy promises to be a fascinating exploration into pre-Christian attitudes regarding sex, sexism, sexuality and relationships. Whilst female homosexuality in the Ancient world still remains an under-explored subject, it’s good that the general topic of homosexuality can be explored with such honesty and openness. As Atfield says:

“People tend to vilify gay people, and this can lead to all sorts of issues regarding identity. In light of this, it’s important to resurrect and reclaim forgotten gay history and present it as something that is to be celebrated, not ignored”.