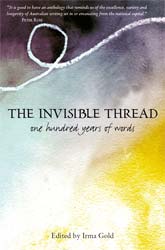 The Invisible Thread is an anthology of one hundred years of writing by those with an association to Canberra. Its launch in November will also mark the launch of Canberra’s official Centenary celebrations. Further, it is an official publication of The National Year of Reading 2012.

While Canberra is a small city, it has attracted a number of celebrated writers and poets and the city’s contribution to national literature is sure to be emphasised in this impressive undertaking.

Tell us about the journey this anthology has been through.

The idea for an anthology of Canberra writing had been kicking around for a while. In 2009, both Melbourne and Brisbane produced anthologies of work from their cities. At the time I was talking with Anne-Maree Britton, then director of the ACT Writers Centre, about how Canberra really needed an anthology of its own. A few days later I happened to receive some promotional information about Canberra’s 2013 centenary celebrations. The timing couldn’t have been better; the centenary clearly offered the perfect opportunity to make an anthology happen.

We got together an advisory committee of local authors (Marion Halligan, Alan Gould and Adrian Caesar) and literary experts, Halstead Press came on board, and we secured funding from the ACT Government and the Centenary of Canberra. Everything began to roll from there. The committee spent one year reading through the work of over 150 writers to create a shortlist from which I made final selections. The Invisible Thread is different in purpose and scope to the Brisbane and Melbourne anthologies. Canberra gets such a bad rap and we wanted to show readers Australia-wide that our city is a meeting place for literary excellence; a place that for its small population punches above its weight. The anthology gives readers a taste of the rich diversity of writers who have made the ACT their home during the last 100 years with the hope that they will be inspired to seek out and explore further work by their favourites.

Our guiding selection criterion was work of excellence, or work that ‘sings’. In some cases the work included is one that the writer is well-known for, but in other cases the works will be unfamiliar to readers, will offer unexpected surprises.

What sort of talent is included in the anthology? Is the writing about Canberra?

We did not set out to produce an anthology about Canberra. Naturally some of the writing is about Canberra but the city itself is not the headline act. The Invisible Thread is wide-ranging in its subject matter and themes, reflecting the broad interests and concerns of writers from our region.

The anthology includes a mix of 75 works of fiction, nonfiction and poetry. Some of the works are by writers who have slipped off the literary radar, particularly women who made a significant contribution to Australian literature, such as Miles Franklin, Ethel Anderson, Marjorie Barnard and Flora Eldershaw. Others have an association with Canberra that readers would not be aware of, such as Alex Miller, Les Murray, Kate Grenville and Garth Nix. And of course there are writers who have long been associated with our region such as AD Hope, Roger McDonald, Bill Gammage, Judith Wright, Kevin Gilbert, David Campbell, Jackie French, Humphrey McQueen, Jack Heath, Rosemary Dobson, Clive Hamilton, Manning Clark, Omar Musa, Geoff Page and Marion Halligan.

Why do you think Canberra punches above its weight so well in literary talent?

Working on this anthology I’ve been thinking a lot about the nature of our city and the wealth of literary talent this region has supported. I’ve filmed a series of video interviews with authors from The Invisible Thread and I asked many of them why as writers they love Canberra, and how it has influenced their work. The responses were so varied, but many of them mentioned that Canberra offers the perfect mix of bush and city. Unlike the metropolises we don’t waste time stuck in traffic and the streets aren’t full of frenetic activity. Canberra offers space and time to reflect, to think deeply without interfering ‘noise’, which is so important for writers. There’s an extract from Roger McDonald’s novel When Colts Ran in The Invisible Thread that expresses this idea perfectly through the voice of his character Major Dunc Buckler: ‘They put space into a town. There’s a lot of space between everything here, and that’s the idea. It’s a fact, if you’ve got space, you’ve got time.’

In addition to the space and time we have so many national collecting institutions that enable and enrich writers’ work. The National Library is an obvious one, but we also have the National Gallery, War Memorial, National Museum, and so on. I’m sure the reason we punch above our literary weight is simply because Canberra is the perfect environment in which to write. No matter how those outside of Canberra perceive the capital, we know that we’re onto a good thing here.

What should lip readers do if they want to buy a copy of The Invisible Thread?

Go to your local bookshop! Paperchain in Manuka is one of our sponsors and we’re currently filming a book trailer for The Invisible Thread in their store. So you can certainly get your hands on a copy there, but of course you can get the book around the country in all good bookshops.