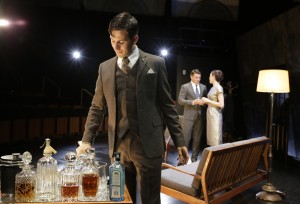 Darlinghurst Theatre Company has begun its 2016 season with the bold and relevant The Pride by British playwright Alexi Kaye Campbell. The script was first premiered in 2008 to critical acclaim and it’s no secret why that is. With poetic and life affirming language and an incredibly important message, The Pride is what theatre is meant to be.

We are first enveloped into the prim and proper world of the not-too-distant past in England, when tweed suits, manners, and keeping private lives private was all the rage. We meet Phillip as he is first introduced to his wife’s employer, Oliver. Sylvia, his wife, is enthralled that the two have finally met, but they don’t seem to get along quite as well as she hoped. We discover that she has previously been “ill,” and has struck gold with an illustration job working for Oliver as he writes children’s novels. We learn later that Oliver and Phillip have had an affair together and Phillip is entirely ashamed of his “hedonistic” ways and calls it off after a few months.

The scene flips on its head as we encounter a modern-day Oliver, stuck in a deep depression after his boyfriend Phillip has left him for good. Oliver is addicted to anonymous sex and Phillip has had enough of the lies and deceits. Their friend, Sylvia, tries to console the two of them, also whilst managing a new relationship with an Italian man that she is head over heels for.

The parallel love stories are then intertwined with further complications. Outside of their own worlds, the pressures of society, both old and current, bear down on each character’s conscience in its own menacing way. In the past, homosexuality is an evil path, but in the present, there is still misunderstanding about what gay men need and hope for, as shown by Sylvia’s rants about people she meets that are naive and judgmental. It’s a slap in the face to see the two tales side by side, as you begin to understand just how little progress has been made.

There’s a clear distinction between what is expected of a man in a particular position – whether it be husband, writer or lover – and what men actually appear to want from their life. We are torn along with each man as they realise they don’t know who they are. It’s a shame, because we can see that what makes them happy is within reach, but the barriers in their way are hundreds of years of backlash, misunderstanding, and hate.

It’s taken many years to get to where we are now – a city of sails that showcases one of the biggest gay pride parades around – but The Pride brings to light the work that still needs to be done. When we will achieve gay marriage like the USA has done? When will hate crimes against homosexuals become a thing of the past? When will we look back on what we do now and squint in horror at the horrible ways we treated our own kin?

The Pride is staged during the perfect time of year for this kind of reflection, and with a polished and bold cast at its helm, it’s sure to make some big waves.