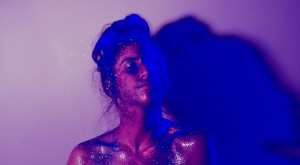 Image Courtesy of Hector MacKenzie of WE LE MIR

A part of Melbourne Fringe Festival program, Madeleine Ryan’s The Unholy Body of Ignatius Grail is an ambiguous, thought provoking piece of theatre that describes a woman’s quest to find her true self.

The studio space is filled with large, colourful abstractions which gleam in the low light. Are these voids, or portals? Three women move silently into the space, passing through the seated audience. Two (Kristina Andersen and Lois Scott) wear huge ceremonial robes. One is robed in deep red, with silver paint on her face. The other’s robe is black. Her long grey hair is visible under a shadowy veil. These archetypal beings wait as the third, a young woman in pink separates (Madeleine Ryan, who also wrote and directed the work) takes her place in the center. The trials have begun.

Our young heroine is running nowhere. She falls down in the same spot she begun. The enigmatic sentinels at the north and south of the space watch without emotion. A soundtrack of droning electronica pulses. Where are we? Who are these silent women? The Mother and the Crone, or aspects of our heroine’s own mind?

The red robed Mother presents the young woman with objects. These items are not gifts, they are tests. Our heroine attempts to solve them. She is given a skin tight dress as red as ribbon and matching heels. She performs a caricature of seduction. She is given boxing gloves. She punches at nothing. There is a loaded gun. There is violence.

Our heroine adopts the costumes, the cruel red heels, a frilly white dress, but she is not herself in them. She is being groomed for civility, into a femininity constructed for others. There are outbursts of savagery as she struggles against the expectations that surround her. She sits in her pretty white dress with a picnic before her, just like Miranda who never returned from Hanging Rock. She waits for a companion who does not come. She erupts, diving her fingers into a cold chicken. Meat, real meat, is furiously devoured.

I looked around at the audience at this point. Most expressions were blank or confused. Then I spotted two other young women across the space. They were staring at the woman with flesh dripping from her fingers intently, with satisfied smiles. The excess, the illicitness of her hunger had pleased them, had excited them. As it had me.

Who is Ignatius Grail? Ignatius. Ignite. This is a ritual of fire in which our heroine’s body must be stripped and burnt in order to rise. For so many young women we are told to be one thing or the other. It’s a trap. The Unholy Body of Ignatius Grail is about finding what makes oneself complete, what makes one shine, beyond what others will tell you is the correct way to be.

There is a happy ending to this story. There is unity and resolution in the flames. Pain is a path to enlightenment. The Unholy Body of Ignatius Grail wouldn’t be everyone’s cup of tea, but I enjoyed myself. And left with an appetite.