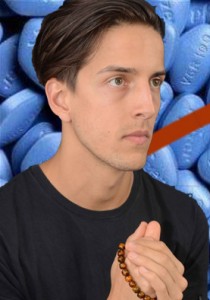 Cast member of The Viagra Monologues: Image courtesy of Off The Avenue Productions

Geraldine Brophy, actress, playwright and author of The Viagra Monologues, says of her recent foray into the male mind: ‘Parenthood, marriage, celibacy, puberty, virginity, are all complex things that influence human experience, for better or for worse. They are common human experiences, not the province of any gender.’ This notion regarding the experiential equivalence of the sexes is very much at the centre of this production, and forms an interesting base from which to evaluate it.

The Blood Moon Theatre, located discretely at the back of Kings Cross’s World Bar, is flooded with Pfizer-blue light as I walk in for the opening night of The Viagra Monologues. Throughout the production, the venue serves as an intimate setting from which the lives of fifteen men – from ages three to seventy-three – tell you the equally intimate stories of their sexual experiences and discoveries.

While waiting for the show to begin, I overheard a conversation between two older people in the row in front of me. The gentleman said, ‘my son’s in this… but I might just walk out. I’m not too good with anything below the belt.’ It was for this exact reason that I believed Brophy’s work would be important: awakening the notion of male sexuality being equally as sacred as that of a female. It is apparent that so many men have their sexuality – or at least the expression thereof – repressed due to societal expectations of what exactly a ‘man’ is. This has been a topic that has intrigued me, and so I eagerly awaited the start of the show.

What followed unfortunately did not meet my expectations. I had heard Brophy claim that ‘many women were generally surprised and/or skeptical of the show,’ and therefore reminded myself to keep an open mind. However, I couldn’t help feeling disappointed by the derivative nature of the monologues. A few of the performances included squeamish references to the LGBTQI community, though I was prepared to overlook this as I understood these views were being expressed by an array of people, not all of whom have liberal views. However, it was more the fact that Brophy appeared to have attempted to unlock the male psyche – only to make penis jokes for an hour and a half.

With this being said, I do feel as though I was in the minority of those who turned their noses up at the wanking jokes. Throughout most of the performances, the audience members around me broke out into laughter, and muttered thoughtfully at the more emotionally charged scenes. Despite the disappointing sophistication of the script, I did enjoy watching the actors perform each scene, as they were undoubtedly enjoying themselves, and more often than not did justice to an incredibly diverse range of characters.

Who knows? Perhaps I was the wrong person to review The Viagra Monologues. Perhaps I entered the theatre with unrealistic preconceptions of the performance. One thing that remains clear to me is that, throughout every character’s monologue, Brophy was endeavouring to construct a representative investigation into the male sexual psyche. Unfortunately, despite ample references to the little blue pill, I found this archetypal study to be an underwhelming flop.

Catch The Viagra Monologues at the Blood Moon Theatre until July 2.