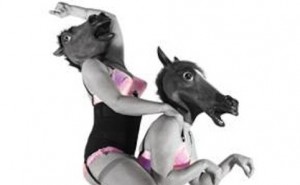 Image courtesy of the Gasworks

Carousel: the Little Battle is a devised piece of physical theatre currently showing at South Melbourne’s Gasworks as part of the Midsumma Festival. The sixty minute piece follows the antics of two female-bodies circus performers who move through scenes that touch on almost all the big feelings that humans experience: love, jealousy, anxiety and dis-ease to name a few.

The performers seamlessly executed the sort of physical feats that most people only do in their dreams – moving with ease from subtle footwork to standing on each other’s shoulders. In this way, the performance created a riveting kinetic empathy for me. The performers held each other’s weight in difficult standing poses, performed complex dance moves (real people can actually do “the worm”?), and contorted their bodies in a way that implied ease and familiarity. To be able to do something so physically taxing, and to do it as if it’s second nature is a craft I greatly admire. I think this was the great strength of the performance. I was spellbound by the way they were able to move, and I watched with an enthusiasm and uncriticality that I haven’t had for the performing arts since I was a child.

The manner in which the two actors performed aforementioned physical feats was also explicitly political. Carousel self describes as a “critique of traditional and contemporary stereotypes of women.” It promises a show which “challenges gender roles within circus art” as well as celebrating the physical strength of women. This was all evident within the performance. Seeing two women perform all the feats of strength and bravado usually left to men was a breath of fresh air. Even more refreshing for me, as a woman whose body is often politely described as “curvaceous”, was seeing a woman roughly my own size performing amazing acrobatic feats of strength and grace.

Whilst the piece was explicit and effective in its political message, I think aspects of it fell short. Carousel advertises itself as a “broadening of gender expectations.” As a queer feminist, watching the performers’ unblinking transition from femme-tastic show ponies to gender neutral clowns to muscle men was optimistic and comforting. However, I didn’t find it particularly “provocative”; gender bending and gender play is commonplace among the queer circles I know of and move in. And, while I normally wouldn’t bat an eyelash about the lives of myself and people I know being marketed as challenging or divergent for a general audience, this piece is marketed to a queer Midsumma audience. The explorations of gender I saw, while beautiful and subtly performed, were nothing outside the scope of my every day.

I was told I would be challenged, and that’s what I expected. Instead, I was met with expertly performed familiarity. For example, there is a lovely racy moment in the piece where the two actors seemingly break character and launch into an erotically choreographed make-out session. Just as I was getting excited to see some female-body on female-body action on stage, rather than just implied, the scene changed. When there’s queer bodies involved, why does the scene always cut before any clothes come off?

I am not saying that the piece needed to be racier- there was nudity and innuendo to rival Lena Dunham’s Girls. I’m saying that, as the piece was marketed to a queer audience, the racy, the sexual and the gendered needed to go deeper.

I understand how this piece is confronting to a general audience – however I feel that if One Trick Pony really wishes to challenge the queer community that they are marketing to, they will need to push themselves and their audience into actual discomfort.

Comfort aside, the skill and spectacle of the piece was enough for me, I could watch those two acrobats tumble over each other for hours on end. Carousel may not be a political must-see this Midsumma season, but I would highly recommend it.

Carousel is showing at the Gasworks Theatre until Saturday February 1.