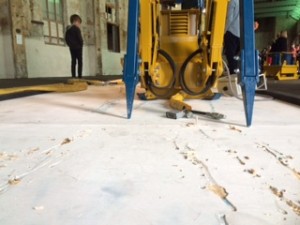 Underbelly Arts Festival began in 2007 as a response to the isolation that can often be felt when working as an artist, especially as an emerging artist. By showcasing emerging artists and focusing on experimental and contemporary art, the Underbelly Arts Festival does its best to live up to its name. It’s the underside of what we normally see, it’s underground, yet to be revealed, and it sings to the core in all of us.

On a surprisingly hot winter afternoon I made my way to the historic Cockatoo Island located just a short ferry ride away from Sydney’s infamous Circular Quay. Cockatoo Island is not a pretty place; it’s full of abandoned warehouses, tunnels, rusty buildings, and machinery that’s not defunct. But this is the magic of the place. Getting lost on the concrete island that’s strangely named for a beautiful, pristine bird, is what lures tourists and Sydney-siders alike. It’s both modern and old, new and historic, fresh and dusty.

So, with a perfect venue, the Underbelly Arts Festival packs in huge crowds on this blisteringly warm day. Families and people of all ages disembark the old ferry and once past the ticket booth, are free to do whatever they want within the festival. The expansive locale instantly makes me feel like I am going to get severely lost (in a good way of course).

I began traversing through the crowd, the pillars, then artwork, unknowingly wandering to nothing and everything. Artworks begin to show their face, and at first this means literally. The first thing you really notice is Lewis Doherty’s Smile, a large neon emoticon placed at the end of a huge warehouse. This piece dwells over every newcomer, and is often the last thing you see when you leave.

There was so much to see at the Underbelly Arts Festival. I definitely missed a few large chunks of it due to not realising that there was performances during the day and also special installations that required you to sign up in advance. I didn’t get the fully immersive experience of the festival, but I found it was still fun to wander aimlessly and discover artworks in nooks and crannies that were both interesting on their own, and more intriguing with art nestled in them.

There was too much to take in at times, and so I know I saw a heap of other works; I could have possibly even walked by a few without knowing they were there! Although the festival was, in this respect, a bit difficult to follow, I think for someone like me it works just fine. If you’re someone who really wants to know where you are and exactly what you’re looking at, it might be a confusing experience to check out the Underbelly Arts Festival.

Nonetheless, the festival drew big crowds and I saw only happy faces. The showcase of works was extensive and all very unique to each other. The festival brought these artists and works together and made them feel coherent, which is really, the aim of the festival to begin with. To take away the isolation of working on something in a room by yourself, and transforming this experience to a collaborative and open-book project.