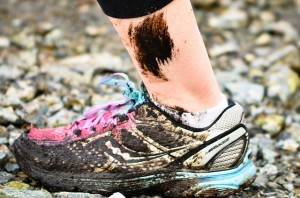 Are you a woman with a huge, physically and mentally challenging goal on your bucket list?  Well, you’re not the only one.

Running long distances, running through mud, receiving electric shocks and trekking mountains are now the norm for challenges which both women and men are grabbing head on.

But the increase of women in these challenges is inspiring. There has been a surge in the number of female participants in marathons, obstacle course type races (think Tough Mudder) and Everest Base Camp treks, just to name a few.

Vanessa is one of the female participants who ran her first marathon earlier this month at the Gold Coast Airport Marathon. Mother, wife, journalist and radio presenter are just some of the titles that Vanessa attaches to herself but now she has one more – marathon runner.

Vanessa, 27 says, “I decided to run a marathon because I wanted a big challenge – something huge and out there. I also wanted to do it for my kids, to help teach them that they can achieve whatever they set their mind to.”

Vanessa not only managed to complete this big goal but also committed to months of training to ensure that she could. She acknowledges that the training was a bigger commitment than the actual race itself. “It was hard to fit in all the runs around the kids, and to get them babysat for long runs. It was not a level of running that was sustainable, but I knew it was just for a period, so I kept the motivation going!”

While she knows that the marathon was no walk in the park either, she well and truly respected the distance and tackled the huge mental and physical battle that lay ahead. Drawing on all the training and build up she did, she had the belief in herself and knew she would finish.

With the challenge of the lead up involved – would Vanessa do it again? “Leading up to the run and for a few days after, I said never again. But like childbirth, the memories of the pain fade! I won’t rule it out, but I don’t think I’d do it again while the kids are still young.”

Vanessa is a true living example of her mantra “life is meant for living.”

From marathons to obstacle courses.

The first obstacle course race was introduced to Australia in 2008. Now, there is an event virtually every weekend. At that time, however, this was the first challenge available. How little women were involved in these challenges is indicative by the name – The Tough Bloke Challenge.

The Tough Bloke Challenge now has many competitors including Tough Mudder, True Grit, The Stampede, Warrior Dash and Kokoda Grunt to name a few. There are whole calendars dedicated to the number of obstacle race type runs and this has increased significantly in the last five years.

With the increase in challenges has come the higher participation rate of women. This is evident as The Tough Bloke Challenge can now also be completed by females. The website encourages this – “Don’t let the name fool you. Tough Chicks hit this course just as hard as Tough Blokes with just under half the field being made up of females.”

Kym is one of those females who has taken on the challenge of obstacle courses having completed two so far with a third on the horizon. “I initially decided to sign up for Warrior Dash as a goal to aim for after having baby number three. The event was 6 months postpartum.”

While Kym ended up doing the event for fun as she was fitter than expected, her biggest challenge was the mindset. “I didn’t know what to expect in the way of obstacles. I was a little worried that I wouldn’t be able to complete the obstacles.”

Kym, 34 needn’t have worried as it was a lot easier than she thought it would be. She had so much fun at Warrior Dash that she didn’t hesitate in signing up for Kokoda Grunt. Kym acknowledges that Kokoda Grunt was more challenging based on the terrain and heat. “If I’d signed up for Kokoda Grunt first then I may not have gone back for a second one.”

The next step up from the obstacle course is the Everest Base Camp Trek. The increase of females participating in this excruciating challenge is apparent, particularly as there are now events geared towards women with women only treks available.

Rachael, 29 has recently trekked to Everest Base Camp. She had previously done a few walks. “I love the challenge of having to live from a backpack for a number of days whilst exploring and being in the most remote areas of our planet.” She specifically chose this trek after seeing pictures in a magazine and wanted to accomplish a mental and physical challenge.

It was a challenge she got. Rachael didn’t suffer initially on the way to Everest Base Camp, however was extremely ill on the return. “This was a huge shame as it was supposed to be the easy part.” She found the hygiene standards and altitude the most difficult parts of the trip. “I found that the most confronting thing to me was the difference in hygiene standards, for example the cleanliness of toilets and showers – when there actually was a shower!” The altitude was very different to what Rachael is used to, “I live at sea level and have never been above 1,500 feet other than on an aeroplane. During the night I would often experience very painful headaches and shortness of breath which lead to lack of sleep.”

Would all of these negatives stop Rachael from doing it again? “Parts of it yes, parts of it no. I will definitely be going on more walks in the future, I think what will change are the destinations.”

These three inspiring women have undertaken some major mental and physical challenges. If you’re thinking about a challenge, give it a go! With the rise of women participation in these types of events, it’s more than likely there will be lots of other female first timers there to spur you on.

Would you do a tough challenge like Tough Mudder? Have you done it before? Do you think there are gender divides with physical challenges like these? Tell us your thoughts below!

One thought on “Are more women entering physically challenging competitions?”