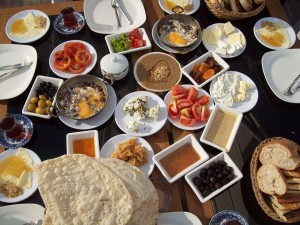 I’ve written about my conflicted relationship with breakfast before: love the food, but find it difficult to eat. One thing I didn’t mention in my previous post is that I’m also quite the Western breakfast traditionalist. At home it’s usually toast, porridge, or yoghurt. Out it’s normally Eggs Benedict or French toast. I also find I have to eat “breakfast food” prior to eating anything else – even if I have a major weekend sleep-in till 1pm, I have to eat an apple before I go for a bowl of pasta. But lately, I’ve  found myself pushing my traditional concept of breakfast – and by this, I don’t mean eating cold, leftover pizza. I mean by taking advantage of living in Sydney, and eating breakfast round the world (but unfortunately not leaving a four letter postcode starting with ‘2’).

Breakfasts inspired by Mexico is an easy way to branch out your breakfast tastes. Smoked hams, chorizo, refried beans and tortillas are featured in plenty of dishes, making them an easy alternative to bacon, sausages, baked beans and toast. A popular dish is ‘huevos rancheros’ – which has many variations, but traditionally is fried eggs on top of a tortilla, with a spicy tomato sauce. Breakfast style burritos are also pretty wonderful – a one handed breakfast! Another thing to love: chocolate is used in plenty of savoury dishes in Mexican food, including their breakfasts. How illicit! And by illicit, I mean completely wonderful.

In Sydney, try Reuben Hills, Surry Hills (worth their salted caramel milkshake in itself).

Lots of people can do pork dumplings first thing in the morning, but I need to be eased into them first. Thankfully, in Chinese breakfasts there are many wonderful doughy options available: silver bread (or silver thread loaves) is served steamed or fried, and often has condensed milk  on the side. Pancakes are also popular, but just not like what we’re used to: they are more of the crepe variety and are folded into long rectangles, and often come with fillings such as pork floss. If you’re feeling slightly more adventurous, there is always Congee (a dish served from the morning till PM): it’s a style of savoury rice porridge with broth, but has been cooked so long that the rice has started to disintegrate. I find Chinese an easy breakfast style to persuade unadventurous people into – the yum-cha options allow you to start more simply, but then work your way into something a little more unexpected.

In Sydney, try New Shanghai, Chatswood Lemon Grove (order anything with ‘deep fried doughnut’ on the menu. Thank me later).

Persian meals – at least the ones served in many restaurants in Australia – are similar to many western meals but with a twist. Expect eggs crusted in pistachio, soft cheese, homemade flat bread instead of toast, and accompaniments such as dates, dried beef, and jams made out of rose and carrot. It’s a great example of seeing how different flavours and twists can be incorporated into familiar foods, and really elevate them into something new and scrumptious.

Japanese breakfasts are the ones that are taking me the longest to embrace. While I love me some miso, I admit to sneaking a muesli bar before hand. Japanese breakfasts aren’t too different to later meals: streamed rice and miso are accompanied by various side dishes such as grilled fish, nori, pickles, and vegetables. Another popular side dish sounds the most Western Breakfast like — Tomago Yaki — as it’s an omlette roll. However, it’s cooked in mirni or sake, which gives it a very distinct taste, and while yummy, isn’t what you may be used to.

Good news – if you can’t stomach any of the above? Look to France for inspiration. One word: crossiant!

In Sydney, try: La Banette Patisserie, Glebe (a French friend swears by it).