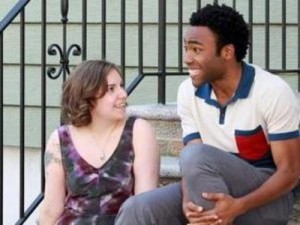 Lena Dunham won a Golden Globe for Best Actress in a Comedy Series, and Best TV Comedy for Girls, and the wins have sparked yet more internet furor about the show, her body, and whether or not Girls is even vaguely representative of young women’s experiences.

I have seen Season One of Girls, and enjoyed it for its fresh, sassy humour, the off-centre plotlines and the interesting characters. I can definitely see the problems with the show, but as entertainment, it certainly satisfies my needs.

The major criticism leveled at the first season of Girls was its lack of diversity in terms of race. All of the main characters are white, and the only non-white characters are generally cameo roles (nurses, fellow nannies, the occasional acquaintance). For a show that claims to be about real girls, living in the real New York, to have such a vanilla cast is a bit jarring.

Critics have said that show’s lack of racial diversity on screen suggests a general disinterest in intersectionality on Dunham’s part at worst, or a naïve overlooking of experiences outside of her own, at best (this Jezabel article sums up some of the main criticisms well).

Here’s the thing – there is nothing invalid about having a TV show about four white girls who are best friends, and who mostly hang out with other white people. Maybe that’s just how they live. If Dunham had specifically tried to pepper the cast with token ethnicities, I would find that more offensive and difficult to digest than the sea of white the show originally had.

As a woman of colour who grew up in a western country, I am used to seeing representations of life on TV that don’t necessarily match up to my own experiences. I mean, when they finally cast an Indian family on Neighbours, there was outrage – I never really expected to suddenly start watching mainstream TV and find it rife with migrants and black people.

The problem for me isn’t that I can’t relate to a show like Girls, or Friends or basically any show aimed at 20-somethings. My experiences are not dissimilar to Hannah’s, the main character in Girls – I study, I work, I hang out with my boyfriend and best friends. I eat pizza. I like trawling the internet for funny YouTube clips. I paint my nails badly. The fact that I do these things while inhabiting a brown-skinned body shouldn’t make much of a difference.

But, for some reason, it does. There is an assumption in mainstream media that if you include the black people, the ethnics, the migrants, you will also have to include their ‘stories’. You will have to incorporate some kind of message on multiculturalism, their cultures and communities, their migration narrative. You can’t just cast an Indian girl as Hannah’s best friend on Girls without having to deal with a million questions about her parents, her religion, where she grew up, if she’s going to have an arranged marriage, if she drinks or eats beef. She can’t just be a girl – she is an Indian girl, and encompasses all that comes with it.

When Rory is best friends with Lane on Gilmore Girls, Lane’s entire plot line over the seven seasons is characterised by her relationship with her mother, her Korean background, and the effect that has on her life. When we see Tina or Mike in Glee, they’re always doing ‘Asian’ things – Asian Couples Therapy, Asian Summer Camp – their ethnicity is a punchline.

I don’t think there is anything wrong with either of these examples – I related strongly to Lane as a teenager, and I think there’s a lot of value in discussing the difficulties of second generation migrants through pop culture. Similarly, I think the jokes in Glee are meant to satirise the issue of tokenism more than anything else.

But the fact remains that there are few examples of ethnic characters in pop culture who aren’t entirely defined by their ethnicities. When I saw the first episode of Season Two of Girls, I didn’t even notice that Hannah’s new love interest is black (played by Donald Glover). In fact, it wasn’t until I read the myriad of articles about the fact that he is black, that is occurred to me that Dunham might have been trying to right some past wrongs.

I don’t think we should be colour blind when watching television, and I definitely think that race narratives need to be told. But as we move into the era of second and third generation migrants, adults who have only known their adopted environments, people like me who can barely identify with a culture outside of the western one they were raised in, diversity on television needs to be both more frequent and more normalised.

I don’t watch TV hoping to see ‘someone like me’ on there – I don’t care if the character I’m meant to relate to is white, black, Asian, Middle Eastern, or whatever. The lesson I have learnt as a minority is to see myself in the majority – if only the same were true in reverse.

For more reading, check out some of these links:

Jenna Wortham on the lack of diversity in Season One of Girls.

Britni Danielle on the same.

Lesley at xojane on the bizarre responses to Lena Dunham’s naked body.

One thought on “girls: now with added black character”