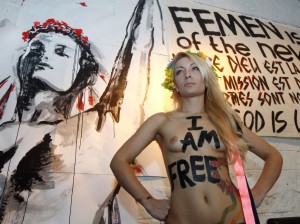 The topless, anti-patriarchy protests of Femen have brought up some fascinating issues for modern feminists to consider. On the one hand, there’s Femen’s point that women in Tunisia are second class citizens and that this should change. But the point that most English speaking, Western columnists have been making the last couple of weeks is that Femen are being culturally insensitive to Muslim women by assuming that there aren’t any women in Tunisia who are fighting for their sisters’ rights and for presuming to know what’s best for others. Finally, there’s the slightly less frequently made point about the tactics being used, namely that baring breasts and painting anti-Islamic statements on those breasts may actually set back the cause of women in countries like Tunisia.

The first point is one which I doubt many feminists would argue with. The third point is open to debate and I don’t know enough about Tunisian society or campaign tactics to offer any kind of opinion so that may be an entirely valid criticism of Femen. I’ll focus here on the second point which I think is misguided.

I watched what appears to be the only English language interview with Femen’s leader Inna Shevchenko and was pleasantly surprised to see that she wasn’t making any vague, self-defeating statements about religion and feminism going together. On the contrary, she quite clearly says that people can pray all they want in their bedroom but that ‘religion has no place in politics’.

Such anti-religious views were quite common in earlier feminist decades, with religion seen as one of the pillars of the patriarchy. But nowadays another emancipatory ideology — a mix of anti-colonialism, anti-imperialism and cultural relativism — occasionally clashes with feminism, particularly when religions popular in non-Western countries are involved. Here we have a perfect case in which many Western, liberal feminists are evidently torn between their entirely noble commitment to women’s rights and their entirely noble commitment to respecting other cultures. So when the two are in opposition, which way do they vote? Incredibly, to me at least, they seem to be siding with respect for Islam and Tunisian social mores (if we take bloggers and columnists as representative of wider feminist opinion).

I think there needs to be some recognition that women’s rights are not just another arbitrary cultural practice, perfectly normal for people in some cultures and deeply disturbing to others. Equality for women didn’t previously exist anywhere, ever, it seems, meaning that the brief time (our mothers’ lifetimes only) that women’s rights have been fought for, legalised, practised and maintained in just a few countries around the world, is in fact a unique moment in history. It took an extraordinary confluence of events including other social changes, a world war, contraceptive technologies, the advent of the mass media and no doubt countless other factors to bring this about and one other crucial factor was the decline in influence of organised religion. Equality for women doesn’t crop up by accident in different cultures all over the place and certainly not in cultures dominated by an openly, unabashedly and acutely sexist religion. Feminism didn’t achieve some novel accomplishment, a bit of historical-cultural frippery — its achievements in the ‘60s and ‘70s signalled a fundamental and unprecedented development in human society.

By comparison, the story of Islam is hackneyed: a religion, built upon pre-existing religions was developed by a charismatic prophet who claimed to hear voices and was able to muster men with weapons to back the claim. The resultant holy text catalogues the dos and don’ts for desert dwelling men from the middle ages, including a description of a post-mortem reward for adherence to said rules. The reward mainly consists of running water, fruit, camels and a buffet of virgins ready to be defiled — the desiderata of men living in a desert climate in the middle ages, one that implicitly suggests Paradise is for men only. This may sound like me just taking an opportunity to go on a good old anti-religion rant, but I’m trying to make the point that regardless of what you think of religion generally, its holy texts and basic tenets are utterly incompatible with feminism.

The favouring of women’s rights over sensitivity and respect for traditional cultures is not new either. Millions of women actually do it every day. For example, Catholic women in the West and increasingly elsewhere, thank God, choose modern ideas about equality over the staunchly sexist doctrines of the Catholic Church and doing so is seemingly no big deal — the human psyche is well able to keep two sets of books. The point is that modern ethics trump the religion most of the time and Catholic women generally ignore all this nonsense about not being able to use contraception and other bizarre papal injunctions, not to mention the bulk of the Old Testament which holds women not far above cattle. They get on with their lives, trying to live the fact of female equality, not the fictions of religious instruction. It’s inconsistent, but it seems to work for people.

Of course there are Muslim women in Tunisia and elsewhere doing the same and indeed going further by actively fighting for equality for women. But I think it’s impossible or at least inconsistent to be a Muslim — or a member of any religion — and a feminist (I know, it’s a big claim, full article on the topic forthcoming in Lip). Ultimately, women in nations where men are overwhelmingly ascendant will have to either jettison their religious beliefs altogether, or treat them as highly flexible and symbolic, as most religious women in the West have done.

Femen’s tactics may well be counterproductive but this does not change at all the fact that Islam is, like all religions conceived of by men in epochs when women were considered property, thoroughly sexist. Members of Femen have been tackled, kicked, groped, arrested, detained and subjected to death threats for pointing out sexism, for showing solidarity with another woman who opposed sexism and for making the statement that female chests are not some shameful thing which must be hidden. For this they have received a scathing censure from, of all people, other feminists. However questionable or indeed ludicrous their tactics may be, the protesters are being victimised for articulating their standard, anti-sexist views and yet they’re the ones being blamed for being insensitive to the source of that very sexism. To me, it’s all too close to victim blaming.

One thought on “Defending Femen”