interview : stacey piggott, on music, promo and how to blow your own trumpet 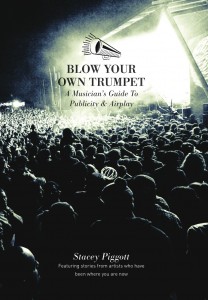 Stacey Piggott is one inspiring lady – not only is the she the director of Two Fish Out of Water, one of Australia’s leading music PR firms, but she’s taken the time to turn her 14 years of experience in PR to write a book – Blow Your Own Trumpet : A Musician’s Guide to Publicity & Airplay.

The book is aimed at self-managed musicians, budding music managers and music industry students with the advice and info to help them promote their own work, or that of the bands they’re representing.

Lip caught up with Stacey to chat about the book, her experiences in the music industry, and what feminism means to her.

You’ve been working in music PR for 14 years – what drew you to the industry, and how did you get your start?

I have always loved music, I was lucky to have parents with incredible taste so was surrounded by great music all my life. I fell into the music industry by accident. When I was 21, I was working as a freelance journalist and also waitressing at a Mexican restaurant in Bondi, and so was Donna Simpson from The Waifs. They were taking care of their own booking, management, distribution and publicity and they had a new record and tour coming up, so Donna suggested I do some publicity for them.

I had never done anything like that before, but loved their music so I went and sat in the news agency with pen and pad and wrote down names and phone numbers out of magazines and papers, went home and started calling people. Things went really well and a number of other indie bands who were friends with them, saw their profile pick up so they asked me to do the same for them, which I jumped at, and eventually there was so much work it became a full time job.

I still work with The Waifs now, which I love, it is pretty special to see a band grow and blossom like that.  I think I have stayed in the industry because music is the one thing in my life that just keeps on giving. Whether it be when I discover artists that have been around for years, who I have never put time into until that point, or see a new Australian band who just blows my mind, there is nothing that gives me the feeling I get when I listen to music or see an awesome gig. I love it!

Blow Your Own Trumpet : A Musician’s Guide to Publicity & Airplay, your new book is a guide to promotion for musicians and managers alike. How did you come to write the book?

I come into contact with grass roots acts on a daily basis and a lot of them seem really lost with where to start when it comes to media. There are so many platforms to cover with online, print, TV and radio, which can be really overwhelming if you don’t know where to start. They also have this idea that to get anywhere they need to spend a lot of money or have a third party act on their behalf.

For young acts, spending outside of their financial means on a publicity campaign can be a futile experience, and can leave them with a mass of debt, bad relationships with the people they owe money to and a world of stress. When I have been talking to artists who are starting out, they seem genuinely surprised that they can contact media themselves, and also surprised when I give them examples of some of our clients who manage their own careers.

I wanted to provide them with a collection of ideas, experiences, stories and explanations that, I hope, will inspire them to pick up the phone and just start calling people to get things moving, rather than sitting there waiting for the phone to ring. Nothing in life happens unless you get up and make it happen, and we are missing out on some really great music because the makers of it are waiting by the phone.

How do you think the changing nature of the music industry (with technological advances) is effecting musicians today?

The only way to break through the noise is to have really great songs. Focus on that, and you will make the noise you need to make to get noticed.

What are some of the professional highlights of your career so far?

There have been so many. Music is one of those things that offers spectacular experience after spectacular experience for a number of different reasons. Seeing a band like The Waifs completely crack open a new pathway of doing business, go from touring the country in a van, to winning ARIA’s, selling multi-platinum records and playing with Bob Dylan was unreal.  Especially seeing as they have been and still are 100% self funded.

Seeing massive biker dudes cry and hug each other at a Clutch show in Melbourne was another, they were so excited and so stoked to be there, the emotion just flowed, it was hilarious.

Any Drones show is a massive high, they are so stunningly brutal, I could watch them for hours.

Seeing a band like Augie March, whose music is so divine, getting so many industry accolades and managing to crack the commercial radio world, at the same time as keeping their feet strongly cemented in community and ABC radio world was great. The show they did with the West Australian Symphony Orchestra one summer in Perth is still one of my favourite shows of all time.

Getting on site at The Falls Festival each year when the grass on the farm is lush and green and the site is all set up, knowing that the next four days is going to deliver hours of great music, smiling faces and experiences people will remember for a lifetime with their mates is one of the things I look forward to each year.

Watching The Jezabels go from playing to 50 people at the Annandale, to five and a half thousand at the Hordern just four years later, at the same time as breaking an international career has been another crazy ride to be on. Another act who are 100% self funded, they work so hard, and are such gorgeous people, I love seeing that sort of thing unfold and the changes in them as artists and as people each step of the way as they grow. I am really proud of them and how they have handled things every step of the way.

Working with Henry Rollins this year has been a huge highlight; I have been a fan since I was a kid. His work ethic, and just general appreciation of his fans and the respect he has for the people who work for him and the media who take the time to talk to him is second to none. He is an uncompromising machine; always gives 150% and one of the nicest humans I have worked with. He is a great example for any artists who want to pursue a long-term career in the entertainment industry.

Man there are so many!

What has been your experience of the music industry as a woman? Do you think it changes anything?

I have never really thought of myself in the industry ‘as a woman’, I am just in the industry and I have had a really incredible experience. I am a pretty strong personality, and I have grown up surrounded by strong, independent, intelligent women.  I come from a blood line of crazy strong women.

My best mate as a kid was a boy, so I have never really approached anything in my life with a second thought about being a woman. I am just me. I am equally inspired by both the men and women I work with and what they achieve, and I interact with them all the same way.

I don’t really ever think about that aspect to be honest. If anyone is to be disrespectful or unreasonable for any reason, I knock it on the head pretty quickly, before it is even allowed to get to the point of being about the fact that I have boobs rather than a penis. So I have never experienced anything negative in the industry as a result of being a woman. I think you need to earn respect from a man or a woman, and I have always been happy to put in the time and effort to earn the people’s respect whose opinions I value, in work and in life.

Do you have any advice for young women wanting to break into this industry?

Lip is a feminist magazine. What does feminism mean to you?