‘it’s like santa for your vagina’: HelloFlo’s refreshing new ad for sanitary products 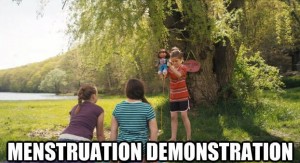 When I got my period for the first time, I was 13 and in year 7 at school. I felt it as I walked home from the bus stop with my sister, and told my mum as soon as I got in the door.

My older sister was sent to show me how to use a pad, and I remember her taking me into the bathroom, handing me a Libra packet and telling me to stick it on my underwear.

‘Oh,’ she said, as a parting shot. ‘Make sure to sleep straight or you’ll leak all over your sheets.’

The experience left me feeling scared, confused, and completely unsure of what the whole event signified.

How different would my experience have been if I had the Camp Gyno to take me through the process?

In a new ad that has been making waves on the internet, a young girl gets her period for the first time at summer camp. Soon, she becomes the go-to on all things menstruation, until her fellow campers can’t take it anymore.

The ad is for HelloFlo, an American sanitary product company that provides home delivered ‘period starter kits’ with pads, tampons and even candy for young girls tackling menstruation for the first time.

It’s a clever idea, and an even cleverer campaign – Kotex and Libra could certainly learn a thing or two.

What’s exciting about this ad campaign is how, as well as being genuinely hilarious and starring a lead actress who is really quite talented, it actually shows pads and tampons without blue liquid, a nude woman, or a beaver cartoon to couch the fact that it’s an ad about periods.

I mean, sure, instead it uses cute tweens and humour to deal with it, but I personally find that a lot more palatable than an ad where a man compares tampon sizes to the presumed size of his penis.

And the best thing about the ad, is that rather than depicting periods as an annoyance, an inconvenience, or something that holds us back from being ourselves, the Camp Gyno ad literally describes periods as ‘the red badge of courage’, and puts  a positive spin on something that is otherwise seen as awkward to discuss.

Whether or not you actually want a period care package delivered in time with your cycle, HelloFlo are onto something with their marketing, and their use of positive messaging around periods gets a big tick from me.