katy perry’s geisha performance an act of love, not racism 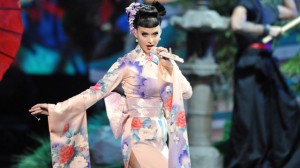 Why? Because she dressed as a geisha. The star’s costume included a kimono (well, actually, it was a cheongsam), traditional hairstyle and kanzashi (hair ornaments). The set was a flurry of fans and cherry blossoms, and the music included traditional shamisen playing and taiko drumming.

Immediately after the performance the internet was set alight with outrage. Perry has been labelled ignorant, offensive and racist.

Ravi Chandra’s article on Psychology Today states that Perry’s costume was a way of acting out a power play. ‘Whites have historically held power. Therefore Katy Perry has the right to use Japanese culture… I think that Katy Perry’s performance meets the criteria for a racist performance.’

But I fail to see any racism whatsoever. Katy Perry is in no way degrading Japanese culture, but expressing her appreciation. The star’s love of all things Japanese is no secret. ‘I am obsessed with Japanese people,’ Perry said last June. Her stylist, Johnny Wujek, told E! that the choice of costume was because they both ‘love Japan.’

‘The people are so kind. There’s so much there visually,’ he said. ‘Just walking around in Japan, you feel something. We wanted to try and encompass that in the performance somehow.’

This is a case of cultural appreciation, not cultural appropriation. Perry and Wujek chose a theme that was close to their hearts, and that happened to be Japan. There is no hint of malice in the performance, no intended racism at all.

But sensitivity is high, and it seems that nobody can express their love for a foreign country without being labelled a racist. We’ve passed the importance of a person’s intentions. Who cares if her performance was out of love, not hate? The point is, she wore another country’s traditional clothes and that’s full stop racist.

I can empathise with Perry. I share her feelings. After having a fascination with Japanese culture all my life, I spent some time there earlier this year.

My wardrobe is full of vintage kimono I bought in Japan. The people I purchased them from were more than happy to help me try them on. In fact, Gion, the geisha district in Kyoto, contains shops that are there purely for tourists to be dressed up like geisha for a few hours. In my experience, many Japanese people are happy to share their culture with others, and see our fascination as a compliment.

But Perry is also receiving backlash over the accuracy of her costume. The modernized kimono has been called a ‘mix between a kimono and a Chinese cheongsam.’ However, Wujek insists that they had specialist help. The Los Angeles owner of the store, Kimono no Kobeya, oversaw everything to make sure that it maintained its authenticity.

‘All of the dancers wore traditional dresses,’ said Wujek. ‘Katy’s version was a little more modern. For her we took a stunning real kimono and reworked it more into a gown.’

If altering a kimono is racist, then Perry is by far not the only person to blame. Try searching for a kimono on Ebay. Compared to what you’ll find, Perry’s alteration was tame and conservative.

Like Lady Gaga said, let Katy be Katy. This isn’t racism. This is a girl who loves Japan and wants to express that love. The performance stemmed from Perry and Wujek’s time overseas. They wanted to encompass the vibe of Japan. It was supposed to be ‘a tribute.’

31 thoughts on “katy perry’s geisha performance an act of love, not racism”