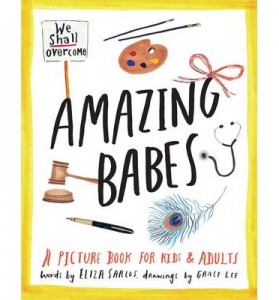 Amazing Babes is a beautiful picture book dedicated to celebrating the diversity and power of women’s achievements in recent history.

Every page features an affirmation from author Eliza Sarlos, singling out and praising one trait from each woman. These statements (e.g.: ‘I want the vision of Miles Franklin’) are paired with Grace Lee’s colourful, energised portraits, which convey the creativity and vibrant character of the women. Lee’s art is reminiscent of the work of Maira Kalman in its messy liveliness and loose realism.

The subtitle of Amazing Babes is particularly apt: ‘A picture book for kids and adults’. This is a book which can be enjoyed by readers of all ages. It operates on a purely aesthetic level for the inspiration it offers; but also as a deeper source of ideas about and access to great women. It is perhaps most valuable as a jumping off point for further research into the stories and accomplishments behind the ‘I want…’ statements.

Australian writer Sarlos originally composed the book as a message to her young son. It sprung from her desire for him ‘to know about these incredible things these amazing women were doing. I didn’t want him growing up in a lopsided world when it came to knowing who to respect and admire’.

There’s a beautifully inclusive range of ages, cultures and backgrounds present in Amazing Babes. The breadth of diversity in the women profiled mean that some of those included will likely be unfamiliar to even the most ardent feminist.

An appendix at the book’s end contains potted biographies for each of the women. In a few clear, simple sentences for each of them, Sarlos describes the triumphs and actions which prove they are truly amazing.

There is plenty to learn from Amazing Babes. Upon reading, ‘I want the fight of Hadijatou Mani’, readers may be motivated to seek out Mani’s story, of being born in Nigeria and sold into slavery aged 12. She later successfully took the Nigerian government to trial for failing to protect her and her children. Likewise, ‘I want the commitment of Bertha Lutz’, will hopefully stir readers to investigate Lutz’s distinguished career as a zoologist, frog expert and founder of the Brazilian women’s movement.

The selection criteria for Amazing Babes seem to have been refreshingly non-judgemental. It would be neither fair, nor productive, to compare the impact of Tavi Gevinson’s Rookie magazine with the thousands of children Irena Sendler saved from the Holocaust. To their great credit, Sarlos and Lee do not attempt to do so. Rather, Amazing Babes is an unqualified celebration of female power and creativity in all its varieties – whether in the form of Shami Chakrabati’s conviction or Mum Shirl’s compassion.

Radical anarchist Emma Goldman’s most famous quote embodies the freedom, creativity and ferocity which suffuse the book: ‘If I can’t dance, I don’t want to be in your revolution’. The women profiled in Amazing Babes will continue to dance and incite revolutions for many years to come.