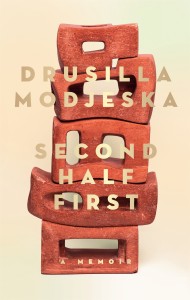 Writing a memoir is a monumental task. And I write that as someone who has never attempted to do so. Consolidating decades of one’s life into a work small enough to be held in one hand seems titanic, especially given the complexity of its primary source: memory.

The subtle art of memoir has been beautifully handled by Australian writer Drusilla Modjeska in her own endeavour, entitled Second Half First. Her work is so named because it begins with her fortieth birthday and details the years that follow this date. Some flashbacks are included, and are so seamlessly integrated into the text that the reader never feels tugged back and forth through time, but rather that Modjeska is comfortably reminiscing about moments gone by as if with an old friend over a cup of coffee.

Modjeska’s memoir includes some profound reflections on her life as a writer, but also as a reader. She traces the influences of women writers in her own life, from historical figures like Virginia Woolf and Christine de Pisan to women she actually met, including the likes of Christina Stead and Helen Garner. The latter, in fact, lived with Modjeska in the aptly named ‘house on the corner’ for a while. This house, Modjeska’s own, is located on an unnamed corner of Sydney’s inner west and is the fulcrum of much of her book, particularly the earlier part. She muses on her days in the house on the corner where ‘…we were free, as free as I’ve ever been. Complicatedly free, but free.’

Modjeska also covers the delicate nature of writing memoir itself, walking the wobbly wire between fact and fiction. Writing about real people is fraught with problems and she references Karl Ove Knausgaard’s approach in writing his voluminous work My Struggle. However, Modjeska gently points out that while Knausgaard’s work ‘should be applauded’, she feels ‘there’s something galling about a man becoming an international sensation for writing the fine detail of family life and its constraints on his writing.’ As she aptly remarks, ‘Reverse the genders and it’s not exactly new’. Women writers have been struggling in exactly this manner for centuries and part of Second Half First deals with this precise battle.

But her work is more than a chronicle of women writers and their place in her life. The book is sewn together seamlessly in four parts; the first is set in the beloved ‘house on the corner’. She then carves out the forms of family life, particularly in her relationship with her parents and her moving reflections on their deaths. This is followed by selected recounts of her experiences in Papua New Guinea. The final section of the book, simply entitled ‘Now’, ties these three previous parts together with her thoughts on the writing of the memoir, exploring themes of growing older and of identity. ‘How young it starts,’ she writes, ‘that need to know where we are, and where we are going. And how long it lasts.’

Her recounted time in PNG focuses on a visit in 2004 when she went to see and write about Ömie barkcloth art. She writes of the women she met there and of the difficulties a country like PNG grapples with, caught between the village-centred social structure and a desire to modernise in their post-colonial world. Modjeska handles these struggles with cultural sensitivity, explaining:

The challenge for Papua New Guinea, at once vulnerable and strong, is how to live in both, combining and reconciling the world of the village and the world beyond, without losing control of the land, the “soul” of the country’s culture…

The role of books in her life as a woman, writer, reader, daughter, lover, aunt, sister, philanthropist and so much more is the central thread running through Modjeska’s memoir. Even at times when writing seems impossible, such as after the death of a parent, Modjeska returns to books again and again, when reading, not writing, can provide unspoken comfort. ‘Books don’t solve grief, or erase it,’ she muses, ‘but they can, and do, give shape and language to experience that at the time leaves us inchoate, literally without words.’

Rich with carefully crafted phrases, this book is a display of Modjeska’s skill as a writer of both non-fiction and fiction. Her perceptive descriptions, which are often deftly economical with words, leave a deep impression. Modjeska even describes the acute and painful death of her own mother: ‘There was no line to mark the end of her life; the final breath became the final breath only when long enough had passed for there to be no other.’

Modjeska muses on the difference between the calling of artists and writers, wishing a little that she were an artist, if only to be able to show a book as an object, ‘… its essence, its being, without reading the words, line by line.’ She does conclude, however, that she is ‘…well reconciled to [her] invisible, odourless calling’ as a writer.

And for that, we – her avid readers – are ever so glad! Because we can enjoy another superbly crafted work from one of Australia’s talented and far-from-invisible female writers.

Second Half First by Drusilla Modjeska