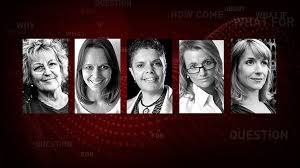 Monday night’s episode of Q&A featured a panel comprised entirely of women. Brooke Magnanti, Germaine Greer, Mia Freedman, Deborah Cheetham and Janet Albrechtsen answered questions put to them by Toni Jones and the audience. I was really looking forward to the show—I expected rigorous debate (and, in particular, for Germaine Greer to intellectually body-slam the intolerable Janet Albrechtsen). Instead we got a discussion about jackets (again) and were told, halfway through the program, that Margaret Thatcher had passed away.

It was interesting that Q&A decided to have an all-women panel—ever since I started watching the program tweeters have been calling for more female representation. There always seems to be more men than women behind the desk. And when a high-profile woman does appear, it comes across as terribly tokenistic—the occasional politician here, the occasional writer there. The majority of air-time is given to the white, male politicians who attempt to shout over one another in a never-ending cavalcade of frothy spit and statistics.

But not this episode, thank goodness. Early on, a question was asked about Julia Gillard’s leadership (surprising no-one). Greer pointed out that Gillard’s speech was exciting for women around the world, while Albrechtsen was quick to label the speech as ‘disappointing’. According to her, there is no evidence whatsoever of Tony Abbott being misogynistic.

Mia Freedman confused me when she said “no-one wants to be that person”, i.e. the person who calls out sexism. However I know many people who do like being that person. It could be argued that Freedman herself is that person. Calling out misogyny and sexism when it occurs is a whole lot better than letting it go unnoticed, unacknowledged, and untreated. However Freedman did win me back to a degree when she said it’s okay to disagree in feminism: ‘We don’t have to hold hands and sing koombiah… feminism should be broad and inclusive.’

Speaking of inclusiveness, we didn’t hear much from Deborah Cheetham. Whenever she spoke I found myself nodding along to what she was saying. She was quick to refute Greer when she dismissed an audience member’s comment that Margaret Thatcher was privileged. While Thatcher came from a middle-class background and was the first female British prime minister, she was educated at Oxford. And as Cheetham said: ‘I doubt Thatcher would have been as successful had she been black and gay.’ When asked about whether feminism was redundant in first world countries and whether our efforts should be focused on developing nations, Cheetham remarked: ‘You don’t have to go to a third world country. Go to the Northern Territory.’

In the end, Monday night’s Q&A was like any other—it predicated a barrage of sarcastic tweets and an implicit desire to kick the television. I do wonder, though, whether the Q&A producers will decide that they’ve indulged the feminists and can go back to practically ignoring them. What do you think?

One thought on “Monday Night’s Q&A – A Review”