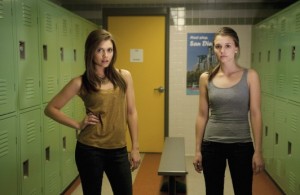 Lately I have discovered a new passion of mine. One that I really  shouldn’t be admitting to in public, but what can I say, I have no shame. And that passion is terrible B-Grade television shows. The cheesier the better. You know the type – bad acting, bad storylines, and even worse, fake tans. But the set is so pretty! The people are so pretty! Their lives are so exciting!

It took a long time for me to admit to this secret desire to spend weekends in bed watching good looking people overact their hearts out. But now that I have, my life is so much more fulfilled. Only…it isn’t. Sure, they provide entertainment, but after spending the weekend in bed watching The Lying Game, I have realised that it’s not the silly past-time I had thought it was.

If you haven’t seen it, The Lying Game is about two twins who were separated at birth, only finding out about each other when they are sixteen. They then proceed to switch places so that one of the twins can search for their birth mother, without her parents, who are obviously hiding a super terrible deep dark secret, finding out. And, like all stories of this type, one twin is rich, and one is poor. One is good and one is evil. The story, if you haven’t guessed already, focuses on the poor, nice twin who is forced to take on her rich, nasty twin’s life for a while.

Yep, that is right. The nice one. The one who speaks kindly to her parents and who boys want to marry. Now normally I wouldn’t spend much of my life thinking about a made up character’s sex life, but that is seriously what fifty percent of the show is about. As soon as I forget, there is the nice twin breathing  heavily and whispering ‘I love you, but I’m not sure if I’m ready’.

Sure, this show is only copying what is seen on ninety percent of our television screens, but for some reason this show in particular really got to me. WHY is it always the sweet girl who is the virgin? And why is it always the confident bitchy one that likes to sleep around? Why can’t we have a show where the nice love interest has fooled around with other men? And hell, if we want to be really extreme, maybe she even enjoyed it.

I personally think, though those who know me can feel free to contradict, that I am a pretty nice person. I smile at strangers, hold doors open for old people, and give money to charity.

I have also had more than one sexual partner. And no, I didn’t lose my v-card to the man of my dreams. In fact, the whole reason I slept with him was because I was eighteen, had just discovered boys and all of the fun stuff that goes with them. And I was curious. I just wanted to see what all the fuss was about.

I know, I know, sex without love. May as well lock me up in a convent now, I’m used goods. Though I could always get a job playing the villain on a television show…

What bothers me most of all is that the same ideals are not forced onto guys. Shows never have the nice guy waiting around for the love of his life before entering bone city.  In fact, their virginity is rarely, if ever, mentioned. And why? Because it is not relevant. It has absolutely no  bearing on the kind of person that they are playing in the show. However it is a completely different story for girls. The Lying Game isn’t to blame; it is just reflecting the attitudes that are still in today’s media. And to be honest, these attitudes wouldn’t be prominent in the media if they weren’t so in society.

Sex is not the big deal that everyone seems to think that it is. I mean sure, it’s fun, but whether someone has tried it out or not says nothing about what kind of person they  are. And it is about time that television shows, the media, and society in general opened up their eyes, moved past the outdated notions that should only ever be associated with the 1800s, and realised that nice girls enjoy a good frolic in the sack just as much as anyone.