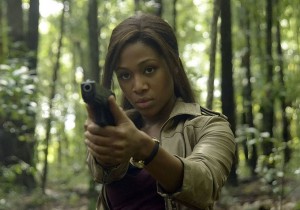 What do a wealthy Melbourne aristocrat, the adult child of a career criminal and a sheriff detective dealing in the supernatural have in common? They’re some of the newest protagonists leading the charge in television’s latest wave of hit crime dramas – a posse of plucky women signalling a renaissance in a genre that’s slowly being eaten away at by shows like Breaking Bad, Hannibal and Dexter.

In the face of an ageing CSI series, spawning multiple spin-offs of questionable quality, HBO and BBC1 flipped crime drama on its head with a renewed focus on criminal narrative. Who didn’t root for the late James Gandolfini’s iconic Tony Soprano as he narrowly evaded the law yet again, while juggling a complicated home life and a sordid Mafia career riddled with fatalities, assassinations and violent extortion?

But a wave of new (and almost new) crime dramas is shifting the lens to rest again on the side of the law – and this time it’s a generation of female protagonists who are on the case!

She’s perceptive, classy and wields a pearl-handled pistol: private detective Phryne Fisher solves the crime while local authorities stumble about in her wake in jazzy 1920’s Melbourne. Essie Davis stars as the eccentric lady detective, donning trousers and driving her own car at a time when it was inconceivable for a woman to live independently, let alone by choice.

Sure, at times the show’s dialogue can border on slapstick, and the situations Phryne and her friends find themselves in are fairly predictable, but if it’s a light-hearted crime drama with a spot of historical narrative you’re after, this won’t disappoint.

As one of ABC’s most popular TV series since 2012, Miss Fisher’s Murder Mysteries boasted an average of 900,000 viewers who religiously tuned each week for the latest in local crime drama, but despite its success the ABC has yet to give it the green light for a third season. While fans of the show wait with bated breath for a decision to be announced, there are 26 episodes to keep new viewers entertained.

Widely hailed as the key to Sleepy Hollow’s success, Nicole Behari’s Lieutenant Gracie Abigail “Abbie” Mills is destined for greatness in this genre-hopping supernatural/crime drama hit. Under the sheer weight of a completely insane premise – a captain in the Revolutionary War wakes in modern-day Sleepy Hollow to stop the apocalypse and teams up with Mills to battle evil – Abbie takes it in her stride and makes the absurd seem real. Her relationship with Ichabod Crane has been compared to the dynamism of Detectives Elliot Stabler and Olivia Benson of Special Victims Unit fame, where Mills helps Crane keep a cool head while avoiding playing second fiddle.

Facing the near-certain end of the world, Lieutenant Mills is the one person her town has faith in – and it doesn’t matter a jot that she’s a 5-foot-nothing African-American woman, as Behari explained at New York Comic Con: “I love that all these women in the show are an integral part of saving the world… that they’re not just there [as] a piece to sort of move the story on and they’re not just batting eyelashes. They’re helping to make the thing happen, if not making the thing happen,” she said.

Having already been renewed for a second season with Abbie Mills at the helm, this is one supernatural crime show I recommend getting behind.

Elizabeth Keen of The Blacklist on Channel 7

Psychological thrillers painted with a background of political espionage are a dime a dozen these days – see Homeland – but NBC’s The Blacklist is the classic cat and mouse game with a twist that had tongues wagging before the pilot even went to air.

The plot focuses on Raymond Reddington, a criminal with a past who unexpectedly hands himself into the FBI to make an incredible offer with one condition: he will talk only to Elizabeth Keen, a novice profiler we meet on her first day at the FBI.

Megan Boone’s Special Agent Elizabeth Keen is a complicated newcomer in the show’s dangerous puzzle, and it’s through her narrative that we’re given mysteries to invest in: what motivated Reddington to turn himself in? How does he know about Elizabeth Keen? Is her husband, Tom, all he appears to be?

Beyond the usual shootouts, stickups and car chases is a thrilling crime drama that rests on the whims of a wanted mastermind while he works with the FBI – seeking redemption, perhaps, in Elizabeth Keen.

Much as I tried to dislike Elementary on the basis of principle, the contemporary American version of Sir Arthur Conan Doyle’s iconic British Sherlock Holmes series now set amongst the skyscrapers of New York, Lucy Liu does a damn good job as Doctor Watson. Liu stars alongside Johnny Lee Miller’s drug-addicted Sherlock Holmes as Joan Watson, a doctor turned sober living companion turned novice detective who’s determined to help Holmes get his life back on track one perplexing case at a time.

Together they assist the NYCPD in solving crimes through unorthodox means. Before being employed to keep an eye on Holmes, Watson was a successful surgeon who lost her job and her license following the untimely death of a patient.

Elementary has caused outcry amongst Sherlock purists – how can we have an American Sherlock Holmes series and a female Watson being chief complaint – but forget comparing it to the BBC’s wholly excellent Sherlock, starring Martin Freeman and Benedict Cumberbatch. Elementary really hits its stride as a breakout standalone series.

2 thoughts on “screenshot: murder she wrote”