the white witch of dandenong 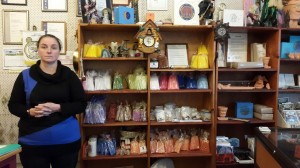 Sarah Kulkens in her Belgrave shop

A seventh generation White Witch, Sarah Kulkens uses timeless rituals and spells to help people. This eccentric religion which was once thought of as evil and satanic proves to be quite opposite to its stereotypes. Unfortunately, Sarah is still being bombarded with hate mail for practising witchcraft.

Hailing from a long line of witches since time immemorial, Sarah is the daughter of renowned psychic Kerry Kulkens. The family’s first step to fame was setting up Australia’s first magic shop that openly sold Crystals and Tarot cards in 1969. Soon after, the white witches appeared in famous television talk shows, radio shows and wrote for international newspaper and magazine columns. Celebrities and politicians visited the Kulkens’ shop in private for readings.

The Kerry Kulkens Magic Shop is located in Belgrave, Victoria, nestled amidst the crisp mountain air of the Dandenong Ranges. Like a time warp into the 60s, a quaint lane unfolds toward the shop, lined with kooky vintage stores. The hippy culture was in full swing, with people walking along the streets draped in colourful raiment.

Sarah’s magic shop stocks an array of items from guardian angels for protection to books on witchcraft, voodoo dolls, spell sheets, original crystal balls and crystal wands for healing. Clad in a blue jumper, teamed with formal black trousers, Sarah looks like any other person in town.

Sarah follows witchcraft like practising any other religion. ‘Wicca is the oldest religion, and dates back further than even Christianity,’ Sarah said. This witchcraft is a combination of Pagan and Wiccan rituals which involve burning incense, candles and getting in tune with Mother Nature. Nature’s power and force is channelled to heal family and friends.

Similar to the Aboriginal practices, Wicca doesn’t uses products that are induced by another being’s suffering. Wicca is designed to help others, whereas black magic inflicts harm. ‘We are on the white side. We use instruments like voodoo dolls to heal people.’

Growing up wasn’t easy for Sarah as the daughter of a famous witch. Witchcraft has long been frowned upon as “evil” and “satanic”. From getting anonymous hate mail, to having her shop burnt down, Sarah has stood strong through the persecution.

Religious fanatics once barricaded the front of the Kulkens’ shop and wouldn’t let people pass. ‘I was nearly abducted by Catholics and Christians who were trying to save me from the “evil, wicked witch of Belgrave”,’ Sarah said. ‘After consistent threats, we believe religious organisations burnt down our shop intentionally. We had people ringing us up saying “now you’re burnt at the stake”.’

Bullying in school was another agitating situation. Parents wouldn’t let Sarah associate with their children. ‘They constantly tried to get me kicked out of the Catholic School,’ Sarah said. ‘People called me “witchy poo”; I got locked in lockers and flushed down toilets [sic]. It was horrendous.’

Sarah rebelled against her mother and ran away from home in her teenage years. She wished to be “normal” because of the harassment she faced. But there was a turning point in her life. ‘When I became a mum, I began looking at different religions and beliefs and realised that you can’t change people’s views. This was when I became happy with who I am.’

Sarah still receives hate messages several times a week. People walk into her shop claiming to save her and try making her visit church. ‘People fail to realise that all religions go by the same context of helping each other. If people interpreted their religion in the right context, the world wouldn’t be in the turmoil it is in now.’

Sarah relates ‘witches being burnt at stakes’ to a religious-based struggle. She says Catholics and Christians tried to overpower other religions by casting them out. ‘Most people those days had Wiccan beliefs,’ Sarah said, stating anybody with green eyes was suspected to be a witch and punished by being dunked into water. ‘There were also healers who used herbs, potions and make-up concoctions. This was classed as witchcraft then but today, it’s called medicine. People from certain religions twisted this around as being evil because they saw it as a threat.’ This fight for authority is still seen today.

Witches have always been stereotypically associated with black cats. Sarah herself had black cats when she was young. But she explains that cats in general have a strong psychic ability and their eyes change colour when danger is lurking around. In black cats, it’s just easier to detect the change in colour.

Though Sarah claims to be doing exactly what people have been practicing for generations, she is labelled “evil” because people are fixated to one view. ‘A woman walked in here saying I’m evil and I should be gaoled because I sell incense,’ Sarah said, explaining the woman believes the devil created it. ‘I told her that it was Frankincense and Myrrh incense that the Three Wise Men gave Jesus. She still said I’m evil. It’s like the sceptic society- even if there is proof, they argue.’

Sarah has been baptised, did her first Holy Communion and visited church every week. But one incident deeply affected her. ‘Once, mum put $20 in the communion bowls which was the most anyone put in the bowls those days,’ Sarah remembered. ‘The priest looked straight at mum and told the congregation how evil it was to follow fortune telling. We never went back to the local church again.’

Reverend Mark Tonkin from Belgrave Heights Presbyterian Church opines that Wicca is not on the same wavelength as Christianity. He doesn’t stand for witchcraft and believes it’s the wrong way to communicate. ‘Being a Christian, I think witchcraft is not where the bible is coming from,’ Reverend Tonkin said.

The mysterious Dandenong ranges itself fosters a special spiritual energy, drawing people with Wiccan beliefs to the hills. Some heavily rely on white as well as black magic. People might appear “normal” but they claim to belong to covens. They hold meetings daily in the forest, sit in circles and chant, meditate, connect with each other, and ask for Mother Nature’s help when in need.

The Kulkens use recipes for potions, spells, rituals and lotions that are thousands of years old. The ingredients have been fine-tuned according to availability to suit current times. Sarah’s great grandmother’s 350 year old spell book calls for ingredients like “wolf’s urine” and “frog legs” which were easily available three generations ago. Some spells require rare ingredients like ambergris – which is bile vomit, musk oil secreted from muskrats’ neck glands and pure rose oil extracted only from white rose petals.

Today, Sarah states that new age witches are more mainstream. It was a huge step to openly sell magic in the 60s. But now, tarot cards and crystals can be bought at many bookshops, chemists and gift shops. ‘When mum was in her heyday in the 70’s, middle aged women used to sneak in and have readings. Men had nothing to do with this and considered this sissy stuff. Now, I get anyone from both sexes, ranging from unemployed people to famous politicians,’ Sarah said.

Sarah also engages in community work as a volunteer fire worker. One of her roles with the fire brigade include feeding fire fighters on the fire ground. She also hosts numerous classes with psychic self-defence and psychic development most in demand. Sarah says women tend to be more powerful in this domain because they have an extra nurturing ability which connects them deeper with Mother Nature.

Being a community-minded person, Sarah has changed the perception of linking witches to satanic practises. More than anything else, Sarah would like to see everyone treated equally and with respect in terms of religion, beliefs or sexual identity.

3 thoughts on “the white witch of dandenong”