affirmative consent: the enthusiastic and ongoing offering of ‘yes’ 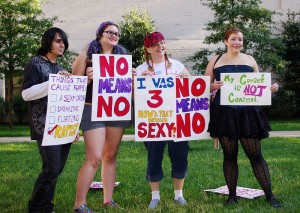 Clementine spoke of shifting the focus in debates about consent from ‘no’ to ‘yes’. Affirmative consent is positive, enthusiastic and on going. But it’s not just about seeking a ‘yes’ rather than a ‘no’, she says, it’s about completely reframing the culture which places the onus of saying ‘no’ on the woman and about undermining the idea that women are open for the taking unless they object. This is the puritan view of sex: the idea that it is in women’s power to grant it and that she must safeguard herself against any male backlash if she denies it. This view also assumes that men view sex as exploitative which is certainly not the case most of the time.

Clementine emphasised this point at the beginning of the lecture when she asked the women of the audience to put their hand up if they’d ever been verbally abused or harassed in retaliation for having rebuffed a man’s advances. No surprises  – a sea of hands filled the lecture hall.

The entitlement men feel towards women’s bodies has most recently been demonstrated by the young man who went on a massacre in Santa Barbara which left six people dead and seven injured last Friday. Elliot Rodger claimed that he was going to prove himself the ultimate ‘alpha male’ and take revenge on all the ‘sluts’ who had sexually rejected him. He resented other men for getting the women he ‘deserved’. This is misogyny at its most violent extreme. The ideology behind these kind of retaliative acts is simple: women owe men sex, love and attention as well as respect and obedience. Our refusal to give it to them is to blame for their violence and anger.

It is also demonstrates that violence against women is closely tied up with the belief that a ‘real man’ has sexual dominion over women. Thus, fear of not being able to achieve the right degree of manliness is often translated into rage. Violence happens when you raise boys to believe they are entitled to a woman’s attention and affection.

Clementine argued that affirmative consent elevates male desire and recognises that it does not have to be framed in these ways. She believes that men should be entitled to explore their sexual desires without worrying if they are reinforcing their sense of masculinity. I agree that men are entitled to more than this toxic model of masculinity but it’s not so simple. If we keep on defining masculinity through power and dominance, society will continue to pay the price.

It was shocking to the audience to hear that a majority of teenage girls do not report sexual violence because they think it is normal. But if we look closely and see violent acts against women not as isolated incidents but as manifestations of a deeply embedded and endemic misogyny, it is not so shocking. Elliot Rodger acted alone but a whole culture made it possible; our social system is harsh to women and rape victims. Women internalise the message that it is better to keep men on their side so that men will not harm or rape them rather than speak up. We still live a society that legitimises male violence and the rhetoric of male entitlement is condoned by legal systems.

I believe we can live a society in which men do not feel entitled to women.

But affirmative consent is also about desire, mutual trust and respect. Consent is to desire, to feel desired and to want your partner(s) to be enjoying themselves. It’s about taking care of them and making sure that pleasure is mututal. One of the ways to do this is to provide young people with the knowledge to help navigate their first sexual encounters which often happen to be fumbly and awkward.

Notably, the lecture was meant to take place at a Canberra college but was cancelled after its Principal expressed concern over the presenter’s use of strong language and the lecture’s ‘sensitive’ material. Such objections are part of frantic cultural paranoia about sexuality in general, and developing female sexuality is particular. Female sexuality –active, adult, female sexuality – still has the power to horrify even the most forward thinking.

Nobody seems to have any problem with the idea of teenage boys having sex. Why is it so shameful and unthinkable for young girls to do the same? Why is it so difficult to speak about pleasure and female desire? Surely girls aren’t passive objects, made up simply of sugar and spice and all things morally acceptable.

We often become uncomfortable when any policy is proposed that seems to prioritise safety and female sexual autonomy (such as the use of the pill). Is it better to hark back to those well-worn methods of shame and ignorance to protect the young and naive? We should really be reserving our outrage for the adults and men who rape, intimidate and abuse on a daily basis.

If we have to give any kind of comprehensive response the rhetoric of shame and abuse which surrounds discussions about sex we need to send out the positive message of affirmative consent and stop heaping shame on the sexuality of women and young girls. Men deserve better than the toxic masculinity society presents them with. Let’s speak honestly and openly to all genders about sexuality and consent. More education is the answer.

P.S. Thanks to Clementine Ford for an inspiring lecture and the ANU Womens’ Department for supporting it!

2 thoughts on “affirmative consent: the enthusiastic and ongoing offering of ‘yes’”