amanda palmer versus the daily mail 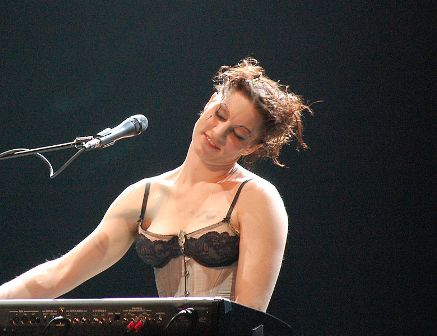 Trashy tabloids love a ‘Wardrobe Malfunction,’ and never fail to get all Shadenfreude on these unfortunate situations. The Daily Mail proved no exception when it covered alternative rocker and cult legend, Amanda Palmer’s recent performance at Glastonbury. Whilst performing, Amanda’s bra did that annoying thing it does where it rides up at the back when you’re busy being a ROCKGOD. Subsequently, there was underboob.

The article is pure scandal-mongering, stating that Amanda’s ‘wardrobe malfunction’ (read: her breast/nipple) was ‘on display for all to see.’ How VULGAR! The tone used to describe how Palmer’s breast ‘escaped’ from her bra is rather rich coming from a publication that sports Page Three girls, and seems all for the objectification of women in all other contexts.

The misogynist work-experience kid they got to drum up this gossipy soup made sure to mention that Amanda Palmer is BISEXUAL (failing to mention she’s also plain-old-married to Neil Gaiman, who is a man), and accompanied the article with photographs of Palmer on stage with her unshaven armpits gloriously akimbo. Just to make it absolutely clear that Palmer is DEVIOUS and her hideously natural body, coupled with her unlady-like demeanour confirms that she is not to be taken seriously. The horrid comments on this article are predictably troll-y: ‘What a disgusting woman’; ‘Keep yourself under control!!’; and my personal favourite for its eloquence and intellect: ‘OMG Shave PLZ!’

But if any of you are fans of The Dresden Dolls/Amanda Palmer, you will know that Amanda is one hardcore lady. Once word of this article got back to Amanda, she performed this response in London recently:

Among other things, Palmer was understandably upset that The Daily Mail did not mention or review her band’s performance, but simply chose to sensationalise her breasts. Among the best comments in her witty and scathing musical response was: ‘Dear Daily Mail, It’s so sad what you tabloids are doing. Your focus on debasing women’s appearances devolves our species of humans.’

Then, in a way Germaine Greer would probably disapprove, she got naked. Subversively, guys, geez. Whether this tactic is a valid one in a culture that is perpetually soaked in female nudity anyway, is debatable. But we definitely do not see this kind of response to tabloid body shaming from the likes of Janet Jackson and Paris Hilton, which makes Amanda Palmer even more special.

I’ll leave you with my favourite line from Palmer’s response, which I’m pretty sure encapsulates my entire being, and I love it:
‘Blahblahblah Feminist. Blahblahblah Gendershit.’

One thought on “amanda palmer versus the daily mail”