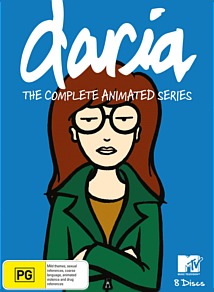 It has been a long, long time coming, a whole decade to be precise.

Apparently there was a time when MTV used to play content relating to music, before dispensing of all that to replace it with reality TV ad nauseam and maybe the occasional song or two. MTV also had an animation department that once played such 90s favourites as The Head, Beavis and Butthead and eventually its spinoff, Daria.

For those unfamiliar with the show, Daria Morgendorffer is our acerbic teenage heroine who moves to Lawndale with her workaholic mother, Helen, clueless man-child father, Jake, and perky and popular little sister, Quinn. At Lawndale High, Daria meets her partner-in-crime, artistic super-snarker Jane Lane, as well as an assortment of other fruits and nuts including the Mean Girls­-esque Fashion Club, uber-sleaze Upchuck, cheerleading ditz Brittany and her more-than-moronic boyfriend Kevin, and teacher-on-the-edge Mr DeMartino, among others.

Throughout five seasons, we witness Daria confront those who view her as nothing more than a ‘brain’ as well as her own self-image and sometimes too-rigid standards, the many irritations high school can bring and her complex relationships with others, along with more light-hearted plotlines involving some far-out fantasies and her not-so subtle crush on Jane’s wannabe rockstar brother, Trent.

Things especially get tense by Season 4 when Daria and Jane’s friendship is put to the ultimate test after Daria essentially ‘steals’ Jane’s boyfriend, Tom. This character 180 divided many fans and sent the show in a direction never imagined, with this writer personally not a big fan of this particular plotline.

The show also takes on social issues such as consumerism, sex, trends and fads among teens more intelligently than most teen-oriented shows, as well as looking at a teenager moving towards adulthood realistically and honestly without sugar-coating or airbrushing, especially with its two movies and toward the final two seasons where the show truly achieves its maturity.

Animation-wise, all five seasons of Daria and its two movies have been remastered well with obvious differences in clarity and sharpness, especially from Season 3 onwards. Obviously, the animation is not going to be of Pixar-like quality with its thick black lines and heavy-hued colour palette, yet is still quite an achievement from the grainy and faded beginnings of Season 1 all the way back in 1997.

Of course, the biggest crux in the 10 year campaign to bring the complete collection of Daria to DVD was attaining musical rights, with many Top 40 hits and indie favourites littered throughout episodes. Since MTV has let the rights to use these songs expire (no doubt to make room for more reality TV), it was unfortunate not only because it hindered efforts to get Daria onto DVD, but because many of these songs were favoured by fans and a few even crucial to particular episodes. The diverse soundtrack was definitely one of my favourite things about the series during its time on air, but its absence a small price to pay after waiting so long. The replacement soundtrack for the series is actually pretty decent and fits the tone well in both its comedic and more emotional moments, and is quite refreshing compared to the generic ‘muzak’ most would have expected in its place.

The extras, meanwhile, have been crammed onto the last DVD in the set. Although the limited few we get are good, it is hard to ignore that a little more could have been added. Daria’s DVD extras include a music video for in-show band Mystik Spiral’s ‘Freakin’ Friends,’ character profiles, Daria Day Marathon Day intros to some episodes, an MTV countdown, animatic pilot, and a rough draft script for a possible Mystik Spiral-spinoff, which reads rather well and showed promise.

Only a short documentary with the writers and voices behind the show totalling about six minutes at the most provides us with a rushed scope of the show and ends just as it gets interesting. You would think that after almost ten years, those behind Daria would want to offer a little more to fans, at least a few featurettes providing an in-depth retrospective on the show and what ideas and processes went into creating each episode, even the relevance Daria still has today among many and what could have been had the show lasted longer. You would also think those behind the show would want to give something special to those fans especially vocal online in making the DVDs a reality.

There are also no commentaries to accompany episodes, which would have also provided some great insights. It seems that MTV has well and truly cleared out the vault after shutting down their animation department in 2002, leaving us with no deleted scenes or other animatics, either. In a way, it feels like the extras were just thrown together as an afterthought, which is sad when you consider how much we still don’t know about the show and will now never get to.

Daria was, unfortunately, one of those series just too good to last, even though the loose ends were tied up nicely. In amongst the sea of airbrushed teenagers, those with no discernable talents fronting reality shows and some aspects of pop culture commonly rewarding mediocrity, a quick-witted young woman who prides herself on gaining knowledge and often stands up for herself is sadly lacking on TV nowadays. MTV has now become the complete opposite of this intelligent series they once championed; now priding itself on catering to the airheaded and banal audience Daria once criticised.

For Daria, the focus was on a sharp script and tackling issues found in both pop culture and society without being ham-fisted or clichéd, as well as looking beyond characters who, on a lesser show, would otherwise be rendered stereotypes. After 10 years, fans can now relive this cult classic and see just what made it so in the first place.

One thought on “dvd review: daria – the complete series”