enough is enough: raising the benchmark on crime 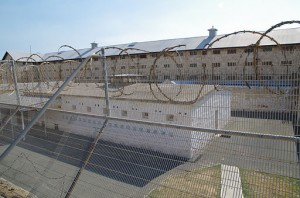 Photograph by Gnangarra via commons.wikimedia.org

Trigger warning: this article contains discussion of rape and violence against women

Stephen Sullivan is part of a movement that has gathered thousands of followers in just a few weeks. Sullivan says it has tapped into an emotion. ‘People have been thinking about what’s been happening the past few years and they’ve actually come on board, because they finally see someone who wants to stand up,’ he said.

On April 12th, a rally is held outside Parliament House. Loud, angry voices boom from the podium, including the controversial Derryn Hinch. They speak to a crowd of men, women and children, some wearing pink and yellow. It’s a growing crowd that feels let down by the Australian legal system.

‘I am angry when our politicians are more concerned with saving criminals from the death penalty in another country than worrying about the people at home, protect us first. Not the criminals,’ said Lucky Pandelidis, a former friend and martial arts teacher to Masa Vukotic.

The Enough is Enough rally, initiated by Stephen Sullivan, his wife Wendy and friend, Kirk Kotz started as a discussion about the murder of 17-year-old Masa Vukotic. It quickly turned into a mission for longer prison terms and tougher bail conditions. While Stephen Sullivan emphasises that the objective is to make all Victorians feel safer, it’s clear that the crimes that spark the most emotion are those perpetrated upon women.

In the last month, there have been three such murders; Masa Vukotic, Stephanie Scott and Prahba Arun Kumar, who was killed just metres from her home. All seemingly random, two of which, were allegedly committed by men with prior convictions. But these are just the few that have gained nationwide media attention.

‘We want the sentencing laws to be changed so those who offend get at least 75% of the maximum sentence imposed. We want the bail sentencing tightened,’ said Sullivan.

Currently benchmarks do exist in the legal system but are rarely enforced. The benchmark for a rape conviction is 30 years, but the harsh reality is that most convicted rapists serve only a fraction of that benchmark. Prior to murdering Jill Meagher, Adrian Bayley was sentenced to four years for a rape charge. He served just two.

‘If Bayley had served 21 years for rape he would still be in jail,’ explains Stephen.

While the rally remains peaceful and officers in uniform keep a comfortable distance, the lingering rage is palpable.

Among the crowd, is the mother of Masa and while she tearfully watches on, she chooses not to speak. The Victorian Shadow Minister for Police, Community Safety and Corrections Edward O’Donohue steps up and greets the crowd with reassurances that the former Liberal National Party government made Victorian streets safer by increasing the Victorian Police presence with 1,900 additional officers. The resentment of the protesters quickly trickles to the surface.

‘Then why are women still being killed?’ one protester screams. Within minutes, O’Donohue’s speech is drowned out by boos and jeers. This is not simply an issue of police presence, it is very much a political one.

‘He was caught in a no-win situation. You have to credit him for coming up to talk,’ said Sullivan.

Noel McNamara, the founder of the Crime Victims Support Association has a speech of his own. McNamara established the CVSA in 1993, shortly after his daughter’s killer received a 10 year minimum jail term.

‘I believe the rehabilitation for a criminal lies at the end of a rope,’ McNamara roars, his words cheered by the crowd. There’s a kind of animosity with the legal system that often goes unsaid on the streets of Australia. It resembles the public reaction that followed the rape and murder of Anita Cobby in 1986.

‘I think the government should put it to the people and hold a referendum,’ said Pandelidis of bringing back the death penalty.

Just like the USA, it would cost Australia more to put these convicts on death row than it would to apply a life sentence. States that do impose the death penalty have a higher homicide rate than those that don’t. Regardless, Derryn Hinch and others like Pandelidis support the possibility of reintroducing the death penalty.

‘I don’t think money even comes into the equation. At least we never have to worry about these people [reoffending] ever again,’ added Pandelidis.

‘If it was one of my family members who was killed I would want an eye for an eye,’ said Violeta, she is just one of the many people who attended the rally.

Yesterday, the organisers of Enough is Enough clearly stated on their Twitter account that they ‘do not support the death penalty’.

But some have accused the organisation of politicising the recent high-profile murders, some individuals took to the organisation’s Facebook page to complain. Sullivan says this is simply not the case.

‘We’re not politicians… all we’re asking for is that the government and those people in power, like judges and the parole board make the correct decisions to make our streets safe,’ explained Sullivan.

A few supporters have been posting statements such as ‘Abbott has blood on his hands’. Sullivan rejects this notion: ‘If we see anything like that, we delete those posts.’

A hidden danger is that this kind of intense campaigning could lead to a new trend, a kind of trial by social media. Last month in Japan, two minors who are currently under investigation for the murder of a thirteen-year-old, had their names, photos and phone numbers leaked online. Since the launch of Facebook there has been a myriad of online hate campaigns for suspected criminals.

Such publicity could unfairly influence potential jurors. However, Sullivan states there are already blankets in place to protect the jury’s decision-making process. ‘I don’t think social media will have much of an impact.’

But others seem uncertain. ‘I do believe that sometimes they get an innocent person and that they shouldn’t release their name until they’re 100 percent sure,’ said Violeta.

For now, the Enough is Enough campaign marches on. There will be more discussion and long negotiations with the government for change.

One thought on “enough is enough: raising the benchmark on crime”