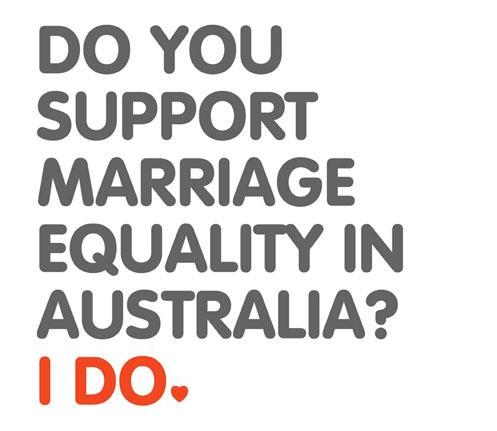 The latest polling shows that 62 percent of Australians support same-sex marriage, yet current legislation does not reflect this. As we talk more about the issue, support for legalising same-sex marriage also grows. Enter ‘I Do Day’, the campaign that aims to raise awareness and promote education about marriage equality as well as raise money for Australian Marriage Equality (AME). I Do Day is the brainchild of Alisha Elliott, who along with her fellow group of volunteers, believes that everyone deserves the opportunity to express their love through marriage. Lip had a quick chat with Alisha about the campaign.

Alisha, you’re a heterosexual soon-to-be-married woman. Why the ‘I Do’ campaign? Why is it important to you?
When I got engaged to [fiancé] Aaron last year, many of my friends and family said, ‘Congratulations, I wish I could get married too!’ It was in that moment that I realised how much of a privilege it is to be able to marry the one you love. The excitement and joy of saying ‘Yes’ and the experience of diving into a future with a new level of commitment is something that everyone should have the right to experience, regardless of their sexuality.

I created the I Do Day campaign because I wanted to do something about it. I am 28 years old and I got to the point in life where I am not willing to sit back and watch the world go by without making a contribution or just allowing other people to do the hard work for me. I want to make a difference to the people around me and inspire others to do the same. The City of Sydney ran a ‘What If’ banner campaign in June. One of the questions posed was, ‘What if…we never stood up for what we believe in?’ and featured an image of a woman picketing for women’s right to vote. I printed it off and stuck it on my wall at work and looked at it every day. I was so inspired by that statement and the courage those women showed but also thought, ‘What would our world be like if those women never stood up for what they believed in?’ We would live in a very different world today. I don’t want to go through life wondering what if. I want to go through life knowing I had a shot; I put my heart and soul into something and I stood up for what I believed in.

The issue of marriage equality is important to me because it is a simple right that all people should be able to experience. It seems downright crazy that this right is not available to everyone and to most people it is a no-brainer. My mother, my cousin and some of my friends and colleagues are not able to express their love through marriage. They are smart, intelligent, beautiful people that contribute to the society we live in just like everyone else.

Why should people get behind it?
The latest polls show that 62% of Australians believe in equal marriage rights, although we still don’t have a change in the marriage law. To see a change in the law requires the 62% of Australians to actually stand up for what they believe in and share that with their community. I am aware that the political and sensitive nature of this issue can deter people from speaking up or they don’t feel compelled to go to the lengths of marching in an equal rights rally or signing a petition.

I Do Day is a way for all Australians to have a voice through simple accessible ways, such as buying a badge or updating their social media status. The power of social media and simple action is so great that these days, you no longer need to march the streets to be heard. I Do Day aims to generate awareness to a broader cross-section of the community so we can generate the groundswell needed for a united Australia to demand a change.

What’s your connection to Australian Marriage Equality?
In creating I Do Day, I researched organisations who were involved in campaigning for this issue and the work of Australian Marriage Equality seemed to have a resounding impact across Australia and in Canberra especially. I was also very new to this particular issue and I found that AME had a great focus on education and a comprehensive range of online resources for learning about the issue. I believe education and development will always be the access to change and moving a society forward and AME are certainly leading [the way towards marriage equality.]

Society won’t change much once this law changes. Nothing much changed when women started to vote. Nothing much changed when black people started marrying white people. It just means as well as Aaron and I getting married in a park in December this year it may also be Kate and Sarah or Ben and Tim. It is really simple. Skeptics have a great way of sensationalising this issue that can be really simple. Gay and lesbian people have been raising children together for years. This won’t change. Marriage will continue to be valued and upheld by those who choose to partake in it. This won’t change. The only thing that will change is three little words and our nation will progress in treating the LGBTI community as equals rather than outliers, just as we have progressed in the same way for the rights of women or black people.

OK, picture this: it’s the perfect world. What do you see?
Something pretty similar to what we have now. Just with a little less anger and fear and a bit of extra love.

Friday March 2 is I Do Day – the inaugural event for all Australians to speak out together and say ‘I Do’ support equal marriage rights. Getting involved is easy. Show your support by purchasing an ‘I Do’ badge from volunteers on the streets of Sydney, Melbourne, Brisbane, Adelaide or Perth; sign the petition calling for marriage equality on the website, www.ido.org.au; update your facebook status and change your email signature to ‘I do’; and ‘like’ their facebook page (facebook.com/idoday) and share it with your friends and family.