in brief: lingerie football league will now be sans lingerie 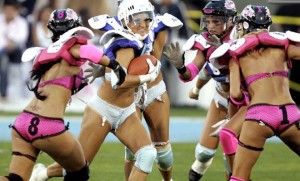 The Lingerie Football League has announced a major re-branding process so as to gain recognition as a serious sport.

Changes will include a switch from lingerie to performance-wear uniforms in order to increase protection for players. New logos will remove ‘any sexy female figures’ and the tagline will change from ‘True Fantasy Football’ to ‘Women of the Gridiron’.

Mitchell Mortaza, the founder and chairman of LFL, says the changes will reflect the ‘maturation of our now global sport.’

‘While the Lingerie Football League name has drawn great media attention allowing us to showcase the sport to millions, we have now reached a crossroads of gaining credibility as a sport or continuing to be viewed as a gimmick.

‘In order to reach the next milestone, we feel the focus has to be the sport and our amazing athletes.’

When the game premiered in the US in 2009 it sparked controversy nationally and across the globe.  Many commentators felt that the sport was ‘undoubtedly sexist’ and ‘cheap titillation’. Players are made to sign an ‘accidental nudity’ clause in their contracts in case their (so called) uniforms come off during the game. Worse, many pointed out that these women were at risk of serious injury due to a lack of proper protective equipment.

Helen Razor took an interesting approach when she wrote:

Crucial to the ‘feminist’ critique of the Lingerie Football League is the idea that the participants in this spectator sport have no volition or are, at best, victims deluded into the idea of ‘raunch’ liberty. This missionary reflex is one we can see in response to women in hijab just as well as we see it extended to those in French knickers. The poor things. They just don’t know they’re being oppressed.

Surely there are few things more demeaning to women than the incessant reminder that they are being demeaned.

Either way, one doesn’t see buff guys playing football in their underwear to hordes of screaming women (and men).

Legends Football League will be launched in Australia later this year.

One thought on “in brief: lingerie football league will now be sans lingerie”