refugees to suffer for the sake of votes 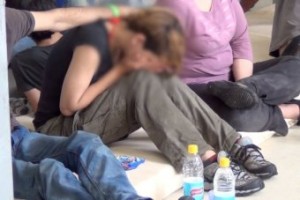 Image via Department of Immigration

With his announcement of Labor’s new refugee policy, PM Kevin Rudd has ensured that instead of doing away with ‘old politics’, his party continues to insist on fighting the coalition on its own turf. For the last decade, at least, the ALP has allowed the Liberal-Nationals to dominate the political discourse, dictate the agenda, and allocate value on a raft of issues, from the economy, to climate change, to refugees.

There are a whole host of reasons why this is detrimental to the Australian Labor Party and its chances of reclaiming some semblance of unity and direction. But who cares?

In its bid to impress the Liberal Party and the Australian public with a zero tolerance stance on the ‘scourge of people smuggling’ (a brilliantly insidious euphemism that seems to have slotted itself into the political debate without protest) it is those who are weakest, most vulnerable and most easily dehumanised, that will suffer for the sake of votes.

This issue is depressingly and exasperatingly difficult to address. Personally, I’m just as unconvinced by those who argue for a more efficient and humane system of on-shore processing whilst remaining silent about the dangers of the boat voyages, as I am by those who argue for cruelty as a justified deterrent to save lives. But although I am unable to offer a magic bullet, it is clear that the government’s decision to send all ‘unauthorised’ boat arrivals to Papua New Guinea for indefinite detention whilst their asylum applications are processed flies in the face of Australia’s responsibilities to uphold basic human rights for refugees.

As a signatory to the 1951 Refugee Convention, Australia is bound by Article 31 which requires that there shall be no discrimination against people based on their mode of arrival. Furthermore, the government’s refusal to settle asylum seekers whose claims are approved goes against its responsibilities under Article 34 which requires contracting states to as far as possible facilitate the assimilation of refugees.

Above and beyond the potential legal implications of Labor’s new policy, the choice of Papua New Guinea as a ‘partner’ is atrocious. At the beginning of this month the last of the women and children who remained in detention on PNG’s Manus Island were transferred to Christmas Island due to inadequate conditions. Another 70 were transferred last month. And just in the last week, the former head of Occupational Health and Safety at Manus Island has raised allegations of rape and torture amongst detainees at the facility, leading to Immigration Minister Tony Burke to announce the removal of all detainees before any new arrivals are sent there under the new policy.

As the Asylum Seeker Resource Centre points out, the capacity of the Manus Island facility is currently 600, with a plan to increase it to 3,000. By any measure, this seems woefully inadequate given that 22,000 people have arrived in Australia by boat since August last year.

Unfortunately, crowded, insufficient, and inhumane detention conditions are not new and are present as much in onshore facilities as they are on Nauru or Manus Island. What is particularly disgusting about this new policy is that rather than resettling refugees in Australia, the government is explicitly off-loading it responsibilities onto a desperately impoverished, crime-ridden nation that lacks even the most basic infrastructure to adequately settle refugees.

Should those who are seeking asylum be lucky enough to survive detention and be granted refugee status, it seems likely they will be left to fend for themselves in a new country that is suffering its own economic, social, and political problems and which is in no position to meet the responsibilities Australia has dumped on it.

By way of example, in the past three years Australia has accepted more than 100 Papua New Guinean refugees, many fleeing from horrific violence and religious persecution. The Australian government itself advises travellers to exercise a high degree of caution due to the increased risk of violent robbery and attack, particularly in urban areas like the capital, Port Moresby.

The danger for women is particularly high in PNG. Around 50% of women have been raped, either at home or on the street, and 68% have suffered physical violence. Incidents of gang rape by ‘raskol’ criminal gangs have been on the rise in recent years and have been a factor in some of the cases of refugee applications to Australia by women from PNG. In addition to the daily physical danger to women, widespread corruption within the police forces and justice system contributes to low rates of sexual assault prosecution.

The Australian government’s new refugee policy is cowardly and cruel. It explicitly and unapologetically targets those who most need assistance whilst foisting our moral responsibilities onto a poor country that is completely ill-equipped to provide adequate support to an influx of new refugees.

How should Australia deal with the influx of refugees?

Do you think that Labor’s PNG resettlement plan will deter those seeking asylum?