hero condoms: ‘have sex, save a life’ 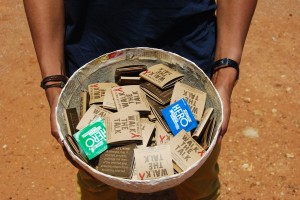 ‘Have sex, save a life’ – a simple tagline, one that could be misconstrued but that’s ok, because Hero condoms takes the joke head on in their ad which shows two people having sex thinking that it will save a man who’s choking on food. The tagline is really saying that if you buy a Hero condom, you will save a life in Africa.

Dustin Leonard, who originally started Hero condoms ‘as a uni marketing project back in 2012,’ conceived this simple concept. A concept that could potentially save the lives of millions of women and men – for every condom sold here in Oz, one will be donated to an AIDS organisation in Africa which will distribute condoms to areas that ‘currently do not have access to this essential product.’ And even though that may not seem like much, it really does take only one condom to stop the disease from being transmitted, which plays a pivotal role in tackling the epidemic.

Hero is also dedicated to helping provide antiretroviral treatment or ART to expectant mothers, which helps to reduce the chances of the disease spreading to children. These treatments are in insufficient supply as only ‘5 of the 10 million HIV-positive patients in Africa’ have been able to receive treatment.

The AIDS epidemic is still a huge problem in Africa. It is ‘more heavily affected by HIV and AIDS than any other region of the world.’ It is estimated that ’22.9 million people are living with HIV’ in Africa, which is about two thirds of the global total.

The epidemic doesn’t look to be slowing down either. Three main issues that lie within Africa are that the Sub-Saharan region has to provide health care ‘to a growing population of people with HIV-related illnesses,’ needs to reduce ‘the annual toll of new HIV infections’ and must cope with millions of deaths related to AIDS that have left many young people as orphans. With these three huge issues at play, it’s difficult for relief organisations to provide full support to the varying needs of everyone who is affected by the disease. A great site to visit for more information and on what you can do to help is UNAIDS.

The epidemic is expected to infect up to 95 million people in the coming decade – a staggering figure that Dustin himself has decided to tackle head on with Hero Condoms.

I got the chance to ask Dustin a few questions, and he told me that launching this campaign has been a huge task. After finding investors it’s been ‘kind of a blur up until now.’ He says that it’s ‘not an easy task launching a product’ and that ‘the competition is extremely fierce.’ He seems optimistic about the company’s future though, and told me that the product is ‘stocked in about 1000 stores nationwide.’ That’s a pretty powerful figure for a project that just over a year ago started in a classroom.

Not only are Hero condoms committed to saving lives, they’re also committed to saving the world – one step at a time of course. They source their latex from natural rubber trees that are located within 30km of their factory so there are fewer emissions, and they also practice friendly water recycling and use solar power. Last but not least, the box that the condoms come in is 100% recycled. They are also ‘proudly working towards becoming a carbon neutral company.’