memoir: breaking up in bangkok 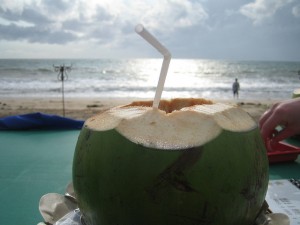 I am waiting anxiously at Suvarnabhumi Airport, pacing back and forth. As with most places in South East Asia, it is swarming with people. I’m not able to find an empty seat and my eyesight is blurry – a mixture of the early morning flight and the hustle of the airport.

I just flew in to Bangkok from Hanoi, having spent the previous two weeks travelling in Vietnam by myself. I’m waiting for my boyfriend, whose flight is due around ninety minutes after mine landed, and I’m trying to convince myself not to run. I know I want to break up with him.

A few months prior to the journey I had been wallowing in a light depression in my suburban Brisbane home, rarely leaving the house for anything. I was scared to be alone and had lost my sense of self. After spending endless nights browsing the Internet I realised I needed to jumpstart my life again, and the best way to throw myself into the deep end was a solo holiday.

The plan was to spend two weeks in Vietnam by myself and then meet up with my boyfriend in Thailand for a romantic reunion. I had planned it all out for us: lazing around idyllic beaches of white sand and turquoise water while we drank cocktails from coconuts.

When I left Brisbane Airport, I openly wept as I said goodbye to my boyfriend, then continued to weep through immigration. At that moment I regretted this whole stupid plan to be by myself, thinking that was no way I could possibly be happy in a foreign county alone.

However, it only took a few days for my attitude to change completely. As soon as I let go of my reservations, I suddenly felt more alive than I had for so long. I hiked around dusty mountains and climbed up rock formations. I meditated next to a small pond in a temple and started to feel peace within myself. I started to like myself again. The exact moment I knew something changed in me was when I found the courage to jump from the top of a boat, ten metres down into the murky waters of Ha Long Bay – a feat my past self never would have attempted.

I lay awake in a cold hotel bed trying to work up the courage to call him and tell him not to bother leaving Australia because there was nothing for him to leave for. But of course I didn’t do it.

So as I wait in Bangkok on the other side of the immigration gates, I pace around the baggage collection area. I’m trying to put together the story in my head, about how I’ve had such a great time without him and how while we were apart I came to the realisation he was holding me back. I’m struggling to find the right words for it though, and can already see him coming through the gates. He looks dazed, and I pretend I don’t see him until eventually he sees me. He runs towards me excitedly, and I try to smile but instead I feel crushed. He hugs me tightly and tells me how much he missed me. I stay silent, hoping he won’t notice how much I’m crying.

Of course he does notice though and tries to soothe me. He seems too excited to see me to really understand that I’m crying because I’m upset and not because I’m happy. I struggle to find my voice, so instead I let him hug me.

After I calm down I lead him down to the taxi rank, so we can head into the city to our hotel. He seems like an entirely different person and I find it hard to believe that he once meant the world to me. I already feel annoyed as he trails behind, and stops for everyone who tries to talk to him. Every move seems to make it obvious to me how different we are.

A woman offering a limousine taxi pulls him aside. ’Let’s go,’ he says. I ask the woman how much, and she replies, ’One thousand baht.’ I laugh and walk away.

’What’s that all about?’ he hisses at me.

’That was triple what we should pay,’ I reply.

I negotiate with a few taxi drivers outside the airport before settling. The tears start again as soon as we sit together in the back seat. For the most part we look out our respective windows in silence, but for a brief moment he reaches out for my hand. I turn to look at him with a weak smile.

‘We’ll be at our hotel soon.’ He tries to sound reassuring. I guess he just thinks I am overwhelmed at the thought of seeing him again. Or maybe he knows. Or maybe he feels the same way. I look back out the window, trying to appreciate this beautiful new city. I really want to appreciate it, but I can’t stop thinking about how I just don’t want to be here with him.

’I emailed you every day. You never wrote back,’ he says as we settle into our room. I never wrote back because I didn’t know he emailed me every day. I hadn’t bothered checking my email. I was having far too much fun to even consider it.

Later in the afternoon I tell him I want to go for a swim in the hotel pool to escape Bangkok’s oppressive heat. He says he would rather stay in the air conditioning and watch TV. This will be a recurring pattern that emerges over the next two weeks.

Before I head to the pool area I stop by the computers in the lobby. After he mentioned the emails I couldn’t stop thinking about them. I feel guilty and uncomfortable. Sure enough, every day he wrote to me. He detailed his day at work, what he did in his spare time, everything he ate, and how much he couldn’t wait to be on holiday with me. I start crying again, and quickly log off and rush towards the pool area.

As I alternate between swimming laps and lazing by the poolside I wonder about what I can do. I start plotting ways to change this holiday that was meant to be a romantic reunion into something more suited to my mood. I can’t settle, and I know I have to talk to him and tell him I can’t be with him anymore.

I gather my belongings and rush up to the room.

‘Hey.’ He smiles at me as I open the door. I force myself to smile back – defeated – and decide that I can’t do it. I put my bag down and join him on the bed where he’s watching TV. I know there is nothing I can change right now.

He kisses me briefly, and even though it feels empty I decide to leave everything for when we get back home to Brisbane.