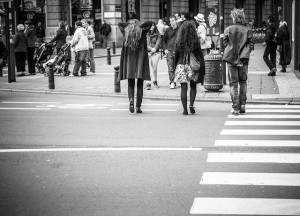 When my friends warned me about the overt sexist comments many young women experience while walking on the streets in some European countries, I wasn’t sure what to think of it. Naively, I laughed, dismissing the issue by claiming I would have some devious feminist comeback if any man was to pester me. This attitude, however, quickly changed when I experienced harassment first-hand.

I was strolling down the streets of Brussels, Belgium, wearing a dress in the humid weather. It was nothing spectacular, not like one might wear on a night out. No heels, daggy cardigan. Out of the corner of my eye I witnessed men eyeing off my legs as I walked past. I am not usually accustomed to any sort of attention like this back home in Australia, so I felt a small part of my pride soar at being noticed. In that moment, I could almost give credit to the argument of some liberal feminists: we, as women, should make the most of this attention and use it to our advantage.

Following the first few incidents, these initial feelings of satisfaction washed away. I was safe in a busy tourist area of the city, but I couldn’t help feeling uncomfortable. A man driving by in a car would shout out to me, while a duo of young men blew kisses from across the main canal. My inability to understand what they were saying due to the language barrier further fuelled this uneasiness. I could interpret their tone enough to guess its unsavoury context.

An inner argument began to ensue, as a defiant part of me declared I should be able to wear whatever I want, while my more anxious side pulled down the hem of my dress. Even after eating my feelings away with Belgian chocolate the leers I had just endured continued to play on my mind.

Once back in the safety of my accommodation, I went online to look up a video I recalled being shown in a sexual politics lecture at university. I found it quickly, and was surprised to discover that it had actually been filmed on the very streets I had just returned from. Called ‘Femme de la Rue’, the short film was created as a Masters project by student Sofie Peeters. Using hidden cameras, she was able to capture the comments, the blatant attempts at flirtation and the harassment she experienced on a daily basis in Brussels. It was a bold move, causing quite a stir in the city.

In the links surrounding this film, I came across an article that discussed the introduction of a new law passed in Belgium earlier this year. This new Anti-Sexism Act attempts to ban sexist speech from public life, and was apparently passed in response to ‘Femme de la Rue’. However, based on my experience, harassment and sexism still appears to be rife in the streets. Furthermore, this issue is apparently one that the public is well aware of. So what more can be done? How can these laws be enforced, and women able to walk down the street without harassment? Brussels is the home of the EU, and a tourist destination, so surely plenty of other women would have experienced the same uneasy walk.

I was personally at a loss, and have since been pondering what this situation says about patriarchal power. Why didn’t I stand up for myself? In part this was due to the language barriers and consequential feelings of alienation. Yet, in retrospect, flipping your middle finger is a relatively universal signal. I had still refrained from reacting. Would it have been different if the slurs were in English? I think the comprehension of what the men were saying would have made me feel even worse. What is the answer then? Education, I believe, is our greatest hope. Not solely education in the sense of schooling, but rather educating everyone in society by raising awareness about this issue that often flies under the radar.

The French short film, Oppressed Majority, offers an interesting spin on street harassment. The flick portrays a world where the tables are turned: men are now the oppressed, while women are the dominating gender. Even in the few minutes the film runs for, you find yourself sympathising with the lead male as he is subjected to preying females – the same harassment that women experience every day. This film seems to suggest several ideas, including the idea that men can be weak and women can be domineering leaders. But furthermore, by portraying a world of opposites that might seem ridiculous to some, it  encourages viewers to wonder why street harassment occurs at all. Fantastic initiatives like this might kickstart the wider education needed to make streets safe for women.

Even after all this research, those calls on the street still play on my mind. As much as I enjoyed visiting the city of Brussels, this experience has made me reconsider my next visit. It will not stop me from returning, but rather I would be inclined to travel with a friend, or simply not wear a dress. Why should I have to be fearful? As much as I can talk to my friends (and online readers) about backlashing against displays of male dominance, the emotions I experience in the moments such as those on the street in Brussels are beyond my control.

And again the inner argument ensues.

It’s situations such as this that fuel my passion for women’s rights even more.

One thought on “street harassment in brussels”